Tim Wilson: made in Manhattan

TV One's New York correspondent Tim Wilson might have spent much of the last decade reporting some of the world's biggest stories but somehow he's found time to write his first novel, too. Stephen Jewell spoke to him in New York. 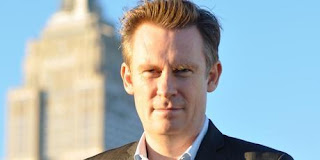 Tim Wilson considers live TV a tightrope act, which when done right, is thrilling. From Hurricane Katrina to the Virginia Tech shootings, TVNZ's American correspondent has witnessed the aftermath of many of the momentous events in American history of the last decade.

All of which has fed into his debut novel, Their Faces Were Shining. Indeed, such cataclysms have marked the 45-year-old's time in New York City - he first relocated there nine years ago, a fortnight after the devastating events of September 11.

"During the first weeks I was here, I was able to walk down by Ground Zero and, even before you got there, you could smell burnt electrical stuff several blocks up," he recalls when we meet at a Lower East Side cafe.
"The book is set in America and during the time I've been here America seems to have been exposed to those kinds of apocalyptic notions, which are times when the established order is falling apart. I've got to watch that over the past few years and it's helped me to write about it from a sort of low level instead of what you usually get, which is the apocalypse from the Nick Cage hero's point of view."

Formerly a staff writer at Auckland's Metro magazine, Wilson had long harboured a desire to shift to the US, which he attributes to suffering a mid-life crisis at the age of 36.