Yesterday afternoon I was meant to have been writing a book review and preparing for an address I am to make later in the week. Over lunch though I started reading the latest issue of Metro and before I knew it the afternoon was largely over.

This is an issue filled with stuff I wanted to read. First up there is a part one of a wonderful conversation between retiring Waitakere City mayor Bob Harvey and Metro editor Simon Wilson. I really liked Harvey's honesty, frankness and absence of bullshit and spin.
Then columnist Minty Mansfield proved as always a hoot and made me laugh out loud. I greatly enjoyed Rebecca Wadey on her wardrobe, interesting stories on architecture and running followed, I was shattered by a story of appalling medical incompetence at Auckland Hospital, and then of course one of several highlights, the Metro 2010 Cafe Awards, glad to see my locals in there, Agnes Curran, Dizengoff and Good One included, but others too I didn’t know about and will check out. 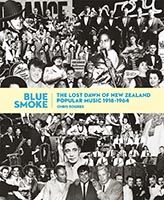 New fiction from Shona Koea, the usual great selection of book reviews, especially enjoyed Gordon Campbell’s review of Chris Bourke’s Blue Smoke, and heaps and heaps of other stuff that entertained and interested me including two Auckland booksellers modelling their gear, Where to Eat in Melbourne, Te Radar's column and a superb cartoon of our new mayor, Len Brown.

IF THERE IS ANY JUSTICE, CHRIS BOURKE'S BLUE SMOKE WILL BECOME THE EDMONDS COOKBOOK OF NEW ZEALAND POPULAR CULTURE.
Gordon Campbell from his review in Metro, Novemeber 2010.