George Bush ends his purdah with a memoir, a library and Oprah

Former US president's first account of time in White House will be 'honest and direct about flaws'
Ed Pilkington in Dallas guardian.co.uk, Wednesday 27 October 2010 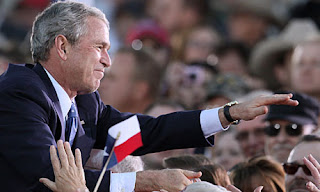 George Bush greets well-wishers upon his return to Texas in 2009 after completing two terms in the White House. Photograph: Tom Pennington/Getty Images

Amid the Republican resurgence that has been building ahead of next week's midterm elections, one key conservative figure has been conspicuously absent.
His public appearances have been limited to bike rides and a baseball game or two, he has avoided endorsing candidates and instead kept himself secluded in the sleepy Dallas suburb of Preston Hollow.

In a couple of weeks, however, the mystery of the disappearing former president is likely to be solved. After two years of an enforced purdah, George Bush will come out into the open.

On 9 November he will give his first public account of his tumultuous two-terms in office in the form of a memoir, Decision Points. Its publication has been timed to hit the shelves long enough after the elections to avoid any accusation of interference but close enough to profit from the euphoria the Republican troops are likely to be feeling from their anticipated drubbing of the Democrats.

Interviews with Oprah Winfrey and on the NBC Today show will give the 43rd president the kind of exposure he has rigorously avoided since he was spirited away from Washington aboard the Marine One helicopter on 20 January 2009. "I have zero desire, just so you know, to be in the limelight," he said in Chicago last week at one of his sparse speaking engagements.

The book is one element of an intricately choreographed attempt on Bush's part to define his own legacy. On 16 November there will be a groundbreaking at the Southern Methodist University in Dallas of his presidential library, which will form the core of a 20,000 square foot Bush Centre that will also incorporate a meeting space and an institute tasked with finding Bush-style solutions to global challenges.

As a taste of the cornucopia of George Bush that is to come, a mini-exhibition of some of the most evocative memorabilia of his time in office has just been opened at the university.

Unsurprisingly, 9/11 features prominently, with a display of the original handwritten notes he made in his favoured black Sharpie pen for his first press statement on the morning of the attacks: "Today we have had a nat'l tragedy. 2 airplanes have crashed into the World Trade Centre … Terrorism against Amer will not succeed."

There's the megaphone he used three days later as he stood on top of the rubble in Ground Zero. "I can hear you. The rest of the world hears you," he said. Beside it is the ball he pitched that same Autumn at Yankee Stadium at the start of game three of the World Series.

If 9/11 was his finest hour, there are also reminders of more controversial decisions. A brick from the Taliban leader Mullah Omar's compound in Afghanistan is displayed next to the 9mm Glock pistol found in Saddam Hussein's possession down his spider hole near Tikrit in December 2003
Read the full piece at The Guardian.
Posted by Beattie's Book Blog at 6:20 am