After sorting through an overwhelming number of entries from across Australia, Dymocks and Murdoch Books are pleased to announce the winner of The Girl with the Dragon Tattoo book cover design competition. 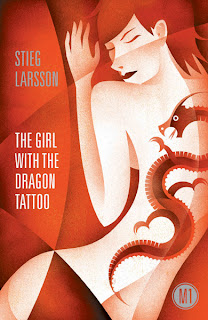 Jonathan Barker, Graphic Designer from the University of Wollongong in New South Wales is set to have his cover design published in a limited, special edition one-off print run of which will be sold exclusively in Dymocks stores in Australia and New Zealand from early November.

“I’m excited to have my work appear on bookshelves all over Australia and New Zealand,” said Jonathan Barker.
“Designing for such a popular book that has already been interpreted in many interesting ways - including feature films - was a terrific challenge. It’s a great opportunity and a real honour to be part of this project.”

Judged by Don Grover, CEO of Dymocks, and Reuben Crossman, award-winning designer from Murdoch Books, the competition called for The Girl with the Dragon Tattoo book cover design entries from across Australia.

As part of the prize, Barker will also receive the new MacBook Air valued at $2,000, the inclusion of his name on the book as well as 20 copies of the special edition.

Stieg Larsson’s Millennium Trilogy is a publishing phenomenon with over 40 million copies sold worldwide. Murdoch Books has sold over 650,000 copies of The Girl with the Dragon Tattoo (Part One of the Millennium Trilogy) in Australia and New Zealand.
Posted by Beattie's Book Blog at 2:10 pm