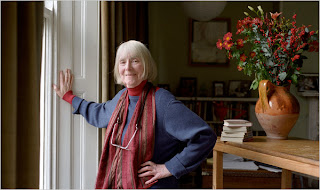 Eva Ibbotson, an English writer for children whose comic novels of enchantment — which rumble with wizards, ghosts, ghouls and mustached elderly aunts — anticipated the work of J.K. Rowling, died last week at her home in Newcastle upon Tyne. She was 85.

The cause was a heart attack, her son Piers said. She died late on Oct. 19 or early on the 20th, he said.
Ms. Ibbotson, who did not publish her first children’s book until she was 50, was best known for her witty novels on subjects magical, supernatural and genially gruesome.

Those issued in the United States include “The Great Ghost Rescue” (H. Z. Walck, 1975), in which a boy sets out to save endangered specters; “The Secret of Platform 13” (Dutton, 1998), about a railway station with a portal to a hidden kingdom; and “Which Witch?” (Dutton, 1999), in which a wizard goes a-wooing. All were first published in Britain.

In later years she turned to adventure novels for young people, including “Journey to the River Sea” (Dutton, 2001), a widely acclaimed story of an orphaned English girl in the Amazon rain forest, and “The Star of Kazan” (Dutton, 2004), about a foundling in turn-of-the-century Vienna.

Footnote:
When I suggested to John McIntyre of The Children's Bookshop in Wellington that Eva Obbotson wasn't that well known in New Zealand he replied:

I agree she misses many radar, but she is well cherished by us, we've even put in a memorial window, and The Star of Kazan and Journey to the River Sea sell in their dozens per month, and have done for the past 6 or 7 years.

She is a beautiful story-teller in the old european style, and when she writes about austria, as she does at times, you can smell the pastries and hear the music of vienna.