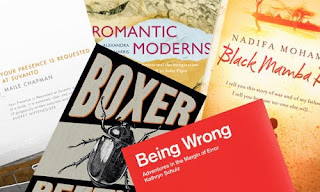 
Books that challenge orthodoxy and readers' expectations dominate the shortlist for this year's Guardian first book award, which includes a novel influenced by the African tradition of sung history, and a study of error that argues we should celebrate our ability to get things wrong.

Three novels and two non-fiction works are vying for the £10,000 prize. The shortlist was chosen by a judging panel that includes the biographer Richard Holmes, the actor Diana Quick and the novelist Adam Foulds, plus Waterstone's reading groups in Oxford, Bath, Leeds, Covent Garden and Edinburgh West, exercising one vote between them.

The Guardian's literary editor, Claire Armitstead, who chairs the judging panel, said: "This brilliant shortlist reflects one of the year's big literary themes – how to tell stories in our new era. Each of these books provides its own very different answer, and it is thrilling that our judges and the Waterstone's reading groups have chosen five such rich and challenging works."

One of the shortlisted novels, Nadifa Mohamed's Black Mamba Boy, has already appeared on the longlist for this year's Orange prize for fiction as well as the shortlist for the John Llewellyn Rhys award. Written in homage to the author's father, and partly based on interviews with him, it tells of a boy's epic journey across Africa in the 1930s, drawing on the African griot or "praise singer" tradition of delivering history.

Another title, Ned Beauman's darkly funny murder mystery Boxer, Beetle, offers the reader an inventive narrative featuring what Armitstead called "bravura post-modern flights of imagination". The story, related by a collector of Nazi memorabilia with a chronic sweat problem, is set partly in contemporary times and partly in the East End of London in the 1930s. 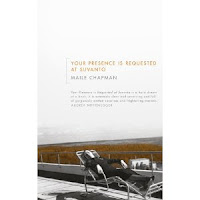 The third novel on the shortlist, Maile Chapman's Your Presence is Requested at Suvanto, challenges convention with its seemingly obscure subject: a group of elderly female patients in a Finnish hospital in the 1920s. The story tells how the arrival of a new patient, a former ballroom-dance instructor with a bad temper, upsets the complex dynamics on the ward.

In Being Wrong: Adventures in the Margin of Error, the journalist Kathryn Schulz asks us to rethink our attitude to our own fallibility, arguing that our discomfort with getting things wrong erodes our relationships, whether in the domestic sphere or on an international scale. Drawing on thinkers from Augustine and Darwin to Freud and even Groucho Marx, she argues that we should instead see error as an essential part of human creativity.

The final book on the shortlist is Romantic Moderns: English Writers, Artists and the Imagination from Virginia Woolf to John Piper by Alexandra Harris, which turns on its head the concept that the artists and writers of the 1930s and 1940s were in love with a provincial world of old churches and tea shops.

Instead, says Harris, the period was eclectic, with figures including Florence White, Evelyn Waugh, the Sitwells and Cecil Beaton all demonstrating that nostalgia and the modern could sit side by side.

The winner of the prize will be announced on 1 December.

Full report at The Guardian.
Posted by Beattie's Book Blog at 7:49 am