from The Daily Beast 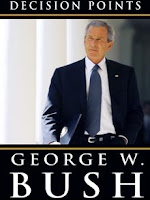 Jimmy Carter’s White House Diary looks like a page turner by comparison. Matt Drudge appears to have scored an early copy of George W. Bush’s memoir, Decision Points, though if his preview is any indication, the book’s a snooze:
Sections that Drudge highlights include a bone about how Crown Prince Abdullah of Saudi Arabia almost walked out of Bush’s ranch because he was so angry about Israel, until he saw a turkey and took it as a good omen. Drudge also says Bush reveals he gave an order to shoot down planes on September 11, and thought the plane in Pennsylvania had been shot down. Drudge adds that Bush rarely addresses his critics and steers clear of President Obama entirely.

Read it at Drudge Report
Posted by Beattie's Book Blog at 9:44 am