Frankfurt book fair finds publishers in buoyant mood
Last year's mood of austerity is apparently in the past, with high-profile titles generating much excitement 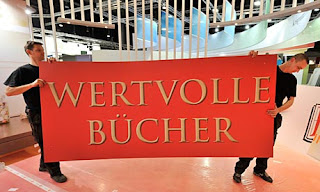 
Literary agents and publishers are setting off for Germany for the annual Frankfurt book fair, which starts on Wednesday (6 October), amid a flurry of announcements of high-profile new books.

Up for international sale in the agents hall at Frankfurt will be a second novel from Kiran Desai, who won the Man Booker with her debut The Inheritance of Loss. The Loneliness of Sonia and Sunny will tell the story of two young contemporary Indians searching for a way to forge a modern relationship, and has already been bought by publisher Sonny Mehta at Alfred Knopf in the US for $2.5m (£1.58m), on the basis of a four-page proposal sent out by agent Andrew Wylie.

Orhan Pamuk's next book A Strangeness in My Mind is to be a panorama of Istanbul's underground culture, told through the story of a street vendor in the city. Meanwhile Anna Funder – the highly acclaimed author of 2003's Stasiland: Stories from Behind the Berlin Wall, which was shortlisted for the Guardian first book award – is back at last, after a seven-year absence, this time with All That I Am, a novel about anti-fascist activists risking their lives to warn the world about Hitler, said to be based very closely on a true story. And Martin Amis appears to be taking the Ronseal approach to book titles with his next novel, State of England: Lionel Asbo, Lotto Lout, said to feature a "ferocious" antihero who gets his first anti-social behaviour order at the age of three.

An authorised biography of South African cleric Desmond Tutu – written by South African journalist Allister Sparks in collaboration with his daughter, Mpho, and garlanded with tributes from everyone from the Dalai Lama to Hillary Clinton – will also be on offer. Agency Curtis Brown said the biography is set for worldwide publication on Tutu's 80th birthday in October next year.
Full report at The Guardian.
Posted by Beattie's Book Blog at 6:52 am