Flash Fiction International: Very short stories from around the world – 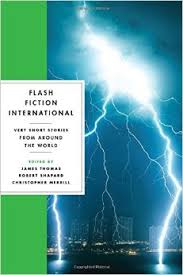 Flash fiction rips the bandages off quickly; it hands you a shot of whiskey and pulls up a stool. It doesn’t take milk in its coffee. It doesn’t mess about with small talk. It will walk your granny across the street, but it won’t see her to the door. It fights without gloves and loves without foreplay. Flash fiction is a punk. And Flash Fiction International is a riot, assembling these quick-shooters from around the globe and across time – Argentina to Zimbabwe, Ancient Rome to New Zealand, with strong entries by our very own Frankie McMillan and James Norcliffe.

In a scape of tweets and soundbites and self-erasing snapchats, we are less often eating ballotine and more often nibbling on canapés. Flash fiction is a perfect mouthful at, typically, 300 words or fewer. But these are no mere entrées to more substantial media. Rather, each flash is a consummate whole. In Flash Fiction International we are spooned yarns which dance on the lid of human behaviour or plunge us to the most intimate recesses of the psyche. There is speculative fiction and Aesopian fable, social commentary, and storytelling about storytelling – There is even, we are told, in an act of self-proclamation, ‘the best story in the world’.

Reading a flash anthology cover to cover is a giddying experience. The reader is jolted in and out of dissimilar worlds, in something like stroboscopic succession. Each story has intensity such that the heart does a little flutter, so by the final pages I felt arrhythmia set in. This is an accolade, in the way that a good hangover points to antecedent merriment. There is a riot in these words. Many of these tales hoot and scream and run amok within their form’s slim parameters. They insist on pasting themselves to consciousness. They smash up the spectacles by which we view the world, and swap them for a kaleidoscope. Twisting once, we are in a dermatologist’s office watching a pimple commandeer the receptionist’s face; twisting again, we follow a naked woman through the streets of Santa Maria; another twist, and we watch a woman devour Christmas lights. These are counterfactual worlds in which the most whacky events merge seamlessly with their realities. This is writing as sorcery.
Despite the cultural and geographical breadth of these stories, we are assured the ‘best’, rather than the ‘widest representation’, make the cut. There are classics and will-be classics. Petronius, Kafka and Maugham are included because ‘they are among the best flashes ever’. At the back of the collection is a section on ‘flash theory’, with weensy quotes about such things as the standing of brevity in literature, the distinction between flash fiction and prose poetry, and the culture of flash.

Flash Fiction International is a dazzling tour of a literary form which, though not new, has only recently secured a pew besides poetry and longer fiction. Not that flash is willing to settle. These stories hop from foot to foot, with all the energy of a sugared-up child. And these stories will insist on loitering in the corridors of the mind; they will lie to your face and poke tongues at longer narratives. Yes, there is a riot in these words. Flash Fiction International is a gift without wrapping.


This is no flash in the pan.
Footnote:
The book is published by W.W. Norton, and has James Thomas, Robert Shapard and Christopher Merrill as editors. The New Zealanders included are Frankie McMillan and James Norcliffe. It is having a NZ launch on 22 June - National Flash Fiction Day.
Posted by Beattie's Book Blog at 12:18 pm