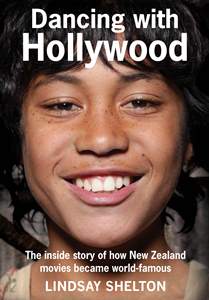 Peter Calder in the New Zealand Herald called it ‘a meticulous record of our modern film industry’. Actor Rena Owen described it as ‘compulsive reading – entertaining, passionate, informative and often very funny.’ It was proclaimed a must for film-lovers. Now Lindsay Shelton’s 2005 book The Selling of New Zealand Movies has been updated and released as an ebook under a new title, Dancing with Hollywood, by publisher Awa Press.

Shelton was the Film Commission’s first marketing director, held the job for 20 years, and pulls no punches about why some films succeed internationally while others crash and burn. Promoted as ‘a rare and absorbing look behind the glamour, to the real business of how movies are made and sold’, the book also includes a filmography of all New Zealand-produced movies.
Posted by Beattie's Book Blog at 3:26 pm