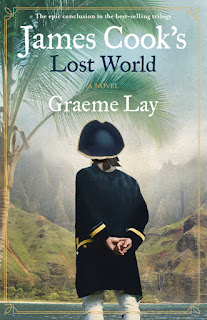 Reviewed this morning by The Bookman with Kathryn Ryan on Radio New Zealand National.

In 2013 Graeme Lay‘s The Secret Life of James Cook was published, then last year his James Cook’s New World followed and now we have the third book in the trilogy, James Cook’s Lost Word. All three are works of fiction but all are of course based on factual events.

Graeme Lay has spent six year researching, reading and writing about James Cook and I would say that he has few contemporaries anywhere who know as much as he does about the great 18th century explorer, navigator and sea captain.

I had the pleasure of hearing the author speak at the recent Auckland Writers Festival and it was remarkable listening to him talk about Cook. It was like he was discussing a member of his family or a close colleague such was the depth of his knowledge of the man. I have to say that as one who has been somewhat obsessed by James Cook for much of my adult life I was enormously impressed.

There have been many factual and biographical books written about Cook in the nearly 240 years since his death, some 20 or so in the last 40 years and it would seem the author has read many of them along with Cook’s journals from which he occasionally quotes especially to illustrate the navigator’s keen observance of sea and weather conditions and his prose style.

The first book in the trilogy dealt with Cook’s young family life, his early naval career, his marriage to Elizabeth and of course his first round-the-world voyage in the Endeavour during which he mapped New Zealand and named so many of our prominent landmarks.

The second in the trilogy covered his second voyage when he was instructed to search the Southern Hemisphere, he went further south than any previous voyagers and again returned home in triumph.

Then we come to the third book; it is 1775 and the Admiralty invite him to lead a voyage to find the long sought passage from the North Pacific to the North Atlantic.
Against his wife’s wishes he accepts the post and so sets off through the South Pacific, including New Zealand, which he knows well then to the north Pacific which he does not know.

After much adventuring, all wonderfully well described, we come to the 14th February 1789, when the two ships HMS Resolution and Discovery have returned to Kealakekua Bay, Hawaii for repairs following a storm in the north that resulted in the Resolution suffering a split foremast.
Although the earlier visit here had been successful and friendly on this occasion unwise decisions were made and hostilities broke out.

The tragic events of this day are well documented in the many biographies of James Cook.  But the biographies do little to address the enigma of a man who rose above his lowly origins to command a fleet of ships on three long voyages of discovery across the vast Pacific Ocean and, how his own actions contributed to his violent death.

Graeme Lay feels the answers are best the work of a novelist rather than a biographer. And I quote   ‘Converting James’s life to a fictional version enabled me to venture inside his mind and provide what I hope are plausible motivations for his actions, both noble and ignoble.’
I found James Cook’s Lost World a great read and superb conclusion to the trilogy and I have great admiration for the author on his fine achievement.

A full-time writer, editor and reviewer, Graeme Lay (right) has written prolifically, including short stories, young adult fiction and travel writing, and has won numerous awards. He has a deep interest in the islands of the South Pacific and Australasia.
Posted by Beattie's Book Blog at 12:22 pm