Dr Lance O’Sullivan has made it his dream to change the world from the Far North. But, as Greg Dixon discovers, first he had to change himself.
By Greg Dixon

To know the son, we must know something of the father.

And it turns out Bill*, who will be 86 in October, was an old mate of Lance O'Sullivan's old man. "He was hard case," Bill says in his sing-songy voice. "He said to me once when we were drinking - we used to drink, you know - he said 'my son's a doctor'. I said 'what did you say there?' He said 'my son is a doctor'. I said 'well if he's a doctor, then my son must be Prime Minister. My son is the Prime Minister if your son is a doctor! He was a hard case, man. It took me a while to believe him."

O'Sullivan smiles as he listens. This story about his late father, which makes Bill's wife and daughter giggle too, has of course been told as we all sit together in a surgery at O'Sullivan's Kaitaia medical clinic. It comes after a long discussion O'Sullivan has had with the family about Bill's ailments, about how many pills he must take and when; and would someone in their whanau make sure he's taking them with his dinner?
More 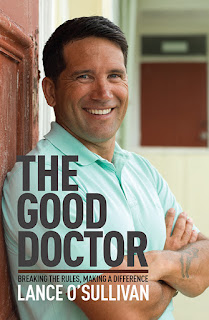 Footnote:
The Bookman is presntly reading "The Good Doctor"
by Lance O'Sullivan with Margie Thomson (Penguin $38) and more will follow on the blog about the book over the weekend.

Posted by Beattie's Book Blog at 9:27 am