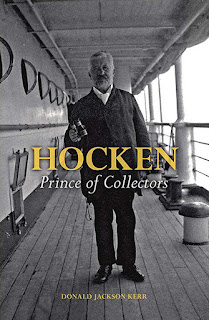 Dr Thomas Morland Hocken (1836–1910) was a mover and shaker: a highly successful medical doctor and surgeon, and an influential figure in the cultural community of early Dunedin. At the heart of his busy life was a passion for collecting. Hocken’s collection of books, pamphlets, newspapers, manuscripts, maps, paintings and photographs, relating to New Zealand and the Pacific, became his greatest legacy.

Hocken: Prince of Collectors is the first thoroughgoing account of Hocken as a book collector. Author Donald Kerr has examined Hocken’s entire collection, including his extensive correspondence and personal papers, and his publications. An account of Hocken’s formative years in England and Ireland gives new insight into the man.

‘Hocken had the vision to salvage historical documents and books relating to New Zealand at a time when this material was not being preserved by any institution,’ says Donald Kerr. ‘Without this material the story of our beginnings would have been lost. He was the right man at the right time.’

The canny foresight and doggedness with which Hocken went about securing material is illustrated in his decades-long pursuit of Samuel Marsden papers. The Letters and Journal of Samuel Marsden, now regarded as a prose epic and a key historical work, was Hocken’s greatest acquisition.

Hocken was also a great educator and promoter: he gave lecturers up and down the country on subjects researched through documents and books he had collected. His library was a working library.

Hocken: Prince of Collectors places him in context with the other major book collectors in New Zealand and Australia: Grey, Turnbull, Mitchell and Dixson and is a definitive bio-bibliographical work on this astute 19th-century bookman.

This substantial book is a most handsome, totally fascinating and significant piece of New Zealand publishing which I am thrilled to own. My warmest congratulations to the author and publishers.

Donald Kerr is Special Collections Librarian and co-Director of the University of Otago Centre for the Book. He is passionate about books and enjoys long-term projects in book history, especially the history of collecting and the formation of private libraries. He has studied the collecting of Sir George Grey, Henry Shaw, Frank W. Reed and Esmond de Beer, and has also written on the history of duelling: The Smell of Powder: A history of duelling in New Zealand (Random House, 2006). Donald is currently working on a book about 12 prominent New Zealand book collectors.

And worth a read is the substantial Review in the Otago Daily Times published this past weekend.
Posted by Beattie's Book Blog at 6:27 am