WB Yeats: looming larger through the mists of time

It is 75 years since Yeats died, but in Ireland his poetry is still part of our mental furniture 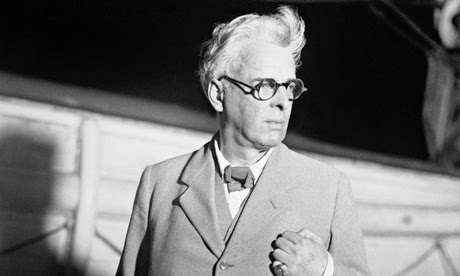 'Neither distant nor imposing' … WB Yeats on the SS Europa, 1932. Photograph: © Bettmann/Corbis

Seventy-five years after the death of William Butler Yeats, his brooding form still towers among the giants of world literature. The first of only four Irish Nobel literature laureates, he was more than just a great poet, he was a man of letters, a spiritual seeker, political activist, philosopher, senator … and more and more.
Here in Ireland, Yeats looms even larger. Yet somehow the old fellow is not nearly as distant or imposing as he seems to those on other shores. Even though he was part of the Anglo-Irish upper-crust, Yeats was never as forbidding to me as, say, Joyce or Beckett.

They're cold, abrasive, at times incomprehensible. Yeats, for all his clipped delivery and grandiose notions, seems quite avuncular. A brilliant, slightly flaky man, indulging his naive but harmless obsessions, ignoring the country pile crumbling around him.

Going through the Irish education system, you couldn't avoid Yeats. He dominated English, he was its heart. For Leaving Certificate English, Yeats was an automatic choice as one of two poetry questions.
More
Posted by Beattie's Book Blog at 7:02 am