The Last of Maui's Dolphins 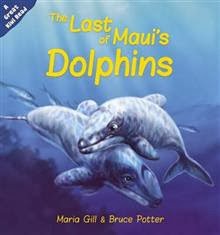 Hiriwa, a new calf, is warned by the pod of Maui's dolphins about the dangers of going near the dark shapes (fishing boats). Hiriwa heeds their warning until one day the bottom-set gillnet from a fishing trawler catches his friends. He does all he can to save them"

About the author & Illustrator

Maria Gill has written over 20 non-fiction children's books for the book trade and educational markets. She regularly visits schools and libraries around the country promoting New Zealand books. She has published six titles with New Holland including New Zealand Hall of Fame (Children's Choice winner at the New Zealand Post Children's Book Awards 2012) The Call of the Kokako (a Storylines Notable Book 2012) Eruption! Discovering New Zealand volcanoes (short-listed 2012 LIANZA awards) and Running the Country: A look inside New Zealand's government.

Bruce Potter is an international award-winning illustrator of over 100 children's books. His Whale Rider (illustrated edition) has been translated into many languages. Bruce is known for his realistic style and fine detail but he also has a background in cartooning and caricature for a number of newspapers around the world. He produced realistic illustrations and caricatures for New Zealand Hall of Fame with Maria Gill.