After an all-male shortlist in 2013, Ann Leckie and Kameron Hurley are in contention for this year's novel award, and short story prize contenders are all women 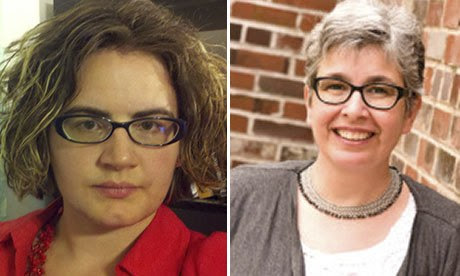 From Kameron Hurley's story of a womb-selling bisexual bounty hunter to Ann Leckie's starship AI downloaded into the corpse of a soldier, the shortlists for this year's British Science Fiction Association's awards have gone beyond "the usual roll call of white middle-aged men".


Announced on Wednesday morning, the BSFA best novel prize pits Hurley's God's War – which opens with the attention-grabbing line, "Nyx sold her womb somewhere between Punjai and Faleen, on the edge of the desert" – against Leckie's debut Ancillary Justice, in which a hive-mind artifical intelligence must animate her one remaining "corpse soldier" to take revenge against her enemies. The line-up – which is voted for by the BSFA's membership of fans, authors and publishers – also features Evening's Empires by Paul McAuley, Ack-Ack Macaque by Gareth L Powell and The Adjacent by Christopher Priest.


The Shining Girls by Lauren Beukes, and the Booker-shortlisted A Tale for the Time Being by Ruth Ozeki, just failed to make the final shortlist, according to awards chief Donna Scott.


Last year both the BSFA and the Arthur C Clarke shortlists were entirely made up of male writers, a gender disparity that prompted calls to increase the visibility of women in science fiction.
More
Posted by Beattie's Book Blog at 6:54 am