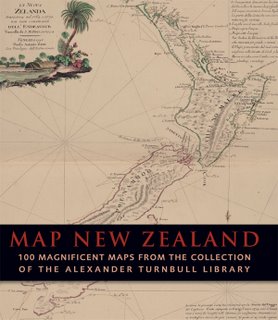 A WORTHWHILE CONTRIBUTION TO THE CULTURAL CONVERSATION

In the 60's I lived in Wellington and one of my favourite places to visit occasionally was the Alexander Turnbull Library in Bowen Street near Parliament House. It was then housed in the former of home of Alexander Turnbull who had gifted the property to the Crown upon his death in 1918 along with his huge collection of manuscripts,paintings,maps, rare books, early newspapers and much more besides.
Ii was there until 1973 when the collection was moved to the nearby National Library in Molesworth Street.

Today the cartographic collection of the Alexander Turnbull Library holds over 60,000 maps, a veritable treasure trove.

This week a very special book featuring 100 maps from the collection is being published by Random House New Zealand under their Godwit imprint.
MAP NEW ZEALAND
100 Magnificent Maps from the Collection of the Alexander Turnbuull Library.

The introduction, and presumably the useful and extended commentary on each map, is written by Dave Small, the curator of the cartographic collection at the Turnbull.
The book is beautifully designed, full marks to Trevor Newman, and user-friendly with each double spread showing the map on one side faced by the accompany text on the other.

This is a big book and I found the best place for reading/viewing it is on the dining room table. I have been browsing/reading it for three days now and I am still not half way through it although I must admit to spending some hours on several of the maps that held particular interest for me.

The maps are arranged in chronological order starting with the Maris Pacifici from 1589 and coming right through to the 1980's and '90's.
There are maps of suburbs,towns and cities, regions,provinces and offshore islands, there are lighthouse and shipwreck charts, there are geological and topographical maps,tourism maps, early road maps and much much more besides.

One of the maps that most interested me was a New Zealand Breweries map c.1960.
NZ Breweries published these maps annually for a number of years. Each of their ten local breweries around the country,(and in Gisborne,where I was growing up in the 1950's, ours was Gold Top Ale), personalised them by adding their name, stapling a calendar and giving them away to their customers.
My Dad was a great consumer of Gold Top Ale and these calendars were always to be found on the wall of our kitchen/dining room.Once the year was over the calendar was removed but the maps remained and they were special favourites of mine. Of course I wish now I had kept them especially as my first student job was doing the filing in the office at that brewery
Today they would be seen as rather non-PC but they were great fun with their rather light-hearted look at our history and tourist attractions.

Other maps to particularly capture my attention included The Charles Haines Newspaper and Population Map of New Zealand 1936 - Auckland 211,913,Wellington 149,816,Christchurch 132,530 and Dunedin 81,983 but all towns and cities figures are included , and Borough of Gisborne 1934,the stunning Auckland 1886,and the interesting Proposed Waitemata-Manukau Canal 1907.
But truly the book is a veritable treasure trove in which I know I am going to spend many happy hours.

As mentioned earlier Godwit is an imprint of Random House N.Z. but it didn't start life that way.
It was founded in 1991 by Jane Connor and Andrew Campbell, both former employees of larger publishing companies. In 1994 Campbell's share was bought by Brian Phillips, a former Managing Director of two of NZ's multi-national publishing subsidiaries.
Connor and Phillips developed Godwit as one of the leading boutique publishers in New Zealand specialising in illustrated non-fiction particularly horticulture,(Jane had special skills in this field),natural history and art.They were also very successful publishers of poetry.
In 1999 the company was sold to Random House N.Z. with Phillips becoming Managing Director of that company amd Jane Connor Publishing Director.
These days Jane Connor is Publisher at Timber Press in Portland,Oregon, Brian Phillips is semi-retired in Christchurch where he runs an on-line bookselling business, and Andrew Campbell is Commissioning Editor for CCH NZ Ltd.(and sings and plays harmonica in several bands).

It is most encouraging to observe that Random House have preserved both the Godwit imprint and their publishing philosophy as is seen with this new title.
I contacted the Godwit commissioning editor Nicola Legat and asked her how she saw the Godwit imprint today.Her response:

"What I could say is that Godwit's remit is wide.It has traditionally covered the fields of gardening,art,history,biography,design and poetry and continues to do so while also having a fairly elastic range.Its benchmarks are high-end design and packaging and making a worthwhile contribution to the cultural conversation".

So here is a stunning coffee table book and the publishers can be assured that it indeed makes a worthwhile contribution to the cultural conversation.
Publication date is tomorrow, 10 November, do be sure to see it at your favourite bookstore, you will not be disappointed.

The only slight quibble I have is that a work of this size and exceptional quality deserved French folds, a trade term to describe the doubling of the paper cover which stops the paper cover (or dust jacket) from curling away from the hardcover and from becoming torn around its edges.
Posted by Beattie's Book Blog at 3:01 pm