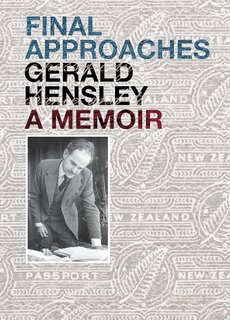 Here are three very different titles each of which I have enjoyed this past week and am happy to recommend.

Do not be put off by the rather text book appearance of this insider's view from one of our most highly respected senior civil servants.
Among other things Hensley was our High Commissioner in Singapore 1976-80, Head of the Prime Minister's Department 1980-87, Head of Domestic & External Security 1987-89 and Secretary of Defence 1991-99. Quite an impressive record.

Then last year he was awarded The QE11 Army Memorial Museum Literary Award valued at $70,000.00 which he is going to use to write a history of NZ's military diplomacy during Word War 2.

In his memoir covering some 40 years he provides a fresh look for political junkies and others at contemporary NZ history, both internal and external. His two chapters, The Last Years of Muldoon and The Elusive David Lange I found absolutely fascinating.

Back in the 1970's NZ Jaycee ran an annual event called The Outstanding Young Man of the Year Award. David Lange and I were both shortlisted one year, probably 1971 or 72, along with eight others. We all spent a weekend together in Rotorua being interviewed by judges as well as sight-seeing and socialising and generally being treated as V.I.P's (which we certainly weren't!).
The contest was won by Dryden Spring, later to be knighted for his services to the dairy industry. Although Lange and I both cringed somewhat in later years at having been involved in the event,we did nevertheless get to know one another well over the weekend and I remained a steadfast admirer of his for the rest of his life.
So it was with huge interest then that I read of the times that Hensley was Head of his Department during his time as PM.

These were of course the days of The Rainbow Warrior ,the ANZUS row, the first coup in Fiji, Cyclone Bola, the Oxford Union debate,and the sinking of the Russian cruise ship Mikhail Lermontov in the Marlborough Sounds.

A fine piece of publishing which will be a most useful addition to the published records of our domestic and international affairs in the second half of the 20th century. 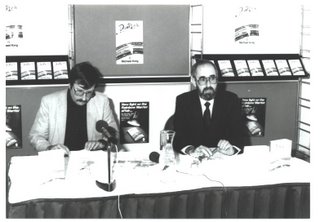 Picture from the blog archives shows the late Michael King, author, and myself, publisher, at the press conference held at the Hyatt Hotel, Auckland to launch The Death of the Rainbow Warrior in 1986.
I recall Warwick Rodger, Editor Metro, asking me at the time what we thought we were doing running a press conference for the launching of a book! I had the feeling he only attended out of respect for Michael King although as it transpired some press stories did arise from the book as a result of new information Michael provided about the case.

This is Wilkins' 5th novel, (it comes after a gap of four years), and it maintains the high standard he set with Chemistry,Nineteen Widows Under Ash,The Miserables and Little Masters.

Our protagonist, Luke, is a young and ambitious diplomat on his first overseas posting in New York where preparations are underway for the 50th anniversary of the United Nations,Jim Bolger was Prime Minister at the time.

One night Luke witnesses an horrific murder which leads to frequent fainting spells so he is sent home to New Zealand to recover living on the Canterbury farm owned by his sister and brother-in-law.

Here we meet an array of wonderfully drawn characters, salt-of-the-earth, decent rural folk on the face of it but with all sorts of uneasy relationships within their community. During this time Luke seems somewhat uncertain of his own sexuality which adds some confusion to his relationship with two of the characters but by the time we get to part two of the novel, set 10 years later, that seems to have been settled.

This is a big, solid and satisfying read although I felt left hanging somewhat at the end. Perhaps Wilkins will give us a sequel? I should welcome that.

And now, as someone once said, time for something different. 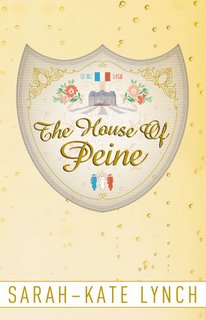 Ever since I read Lynch's third novel, By Bread Alone, I have been a fan and now with her fifth novel she again pleases. This is the story of 40 something Clementine's battle to save her family's Champagne house after her father dies and leaves the business to Clementine and her two estranged sisters.
As with her previous books Lynch has done her research thoroughly. She learned French then spent time in Champagne and Paris, (why wouldn't you?!), and then with that behind her has woven an intricate plot, developed interesting characters,employed her strength with dialogue, thrown in a few twists and hey presto another entertaining read that like her previous titles is bound to sell just as well in the U.K. and other markets as it does at home here in New Zealand.

Don't be fooled by some who classify Lynch's books as chick-lit. It ain't. Her characters are not in the right age group to start with! No, it's just good old fashioned entertaining reading.
P.S. If you like the occasional glass of Champange be sure to read the author's afterword where she talks of the research into this subject and of those who helped along the way..

Posted by Beattie's Book Blog at 8:30 am