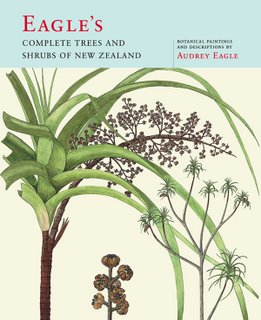 Way back in 1975 William Collins (New Zealand) Ltd.,as they were then known, published a most stunning book, Eagle's Trees and Shrubs of New Zealand in Colour.

In those days I was a bookseller at Beattie & Forbes Bookshop in Napier and I was so taken with Audrey Eagle's glorious illustrations when the publishers sent me proof pages prior to publication that I immediately wrote to the author/illustrator in Ngaruawahia to offer my congratulations.

I was reminded of this last week when I read a review of the new edition in the November issue of Forest & Bird. I went and hunted out my copy of the original publication and was delighted to find that 31 years ago I had popped inside the book correspondence between my self and the author and the publishers.
In her letter to me dated 1 August 1975 writes -

Thank you for your enthusiastic letter about my book.Your comments are the first I have received from someone who has not "grown up" with the book and it is gratifying to know that you consider it so acceptable".

Subsequently I arranged for a second launch of the book, (the first was held at the Auckland War Memorial Museum),at the Hawkes Bay Art Gallery & Museum in Napier on 24 November accompanied by an exhibition of the original artwork from the book.

It was a very happy occasion with many copies of the book being sold at a special launch price of NZ $42.50, the post publication price was NZ$50.00, it seemed a huge price back in those days!

For the interest of book trade folk, those that were around in the 70's anyway, the people I corresponded with at Collins included David Mackie(Sales Director),Pat Kent(Publicity), Margaret Jones (Editorial),Larry Gordon (sales rep).Ted Ford was the publisher at the time,and David Bateman was the M.D.
And the Hawkes Bay Art Gallery & Museum was directed by James Munro who curated the exhibition.

Then in 1982 Collins published a second volume, Eagle's Trees & Shrubs of New Zealand Second Series.
Tucked inside my copy of this volume I found a review by Robyn Baker which appeared in the NZ Times 16 January 1983.
Robyn Baker writes, inter alia:

The text of the two volumes mentions all the species and varieties of trees and shrubs accepted in "H.H.Allan's Flora of New Zealand Vo.1", and in addition contains illustrations and descriptions of trees and shrubs discovered or recognised as species since the 1961 publication of that book.

The second series also includes a number of plants which have not been illustrated before. Audrey Eagle relied on Tony Druce, a botanist with the DSIR, to identify these plants.

It took Audrey Eagle eight years to complete the second series. The last two years were involved with the text, which describes where the plants are found, the heights and general shapes.
Audrey Eagle has given the original paintings to the Turnbull Library.

In Audrey Eagle we have an inspiring example of a person who has made a 30 year commitment to produce these two volumes, and through her definitive work New Zealanders have a truly remarkable and invaluable inheritance.

And so to the two new volumes.
They contain every botanical artwork from the earlier books, with over 170 new paintings, depicting every presently known native tree and shrub in New Zealand.
They are, as the publisher says, the result of decades of skilled draughtmanship and loving, painstaking observation, as well as many years of field and laboratory research by New Zealand scientists.They represent Auydrey Eagle's life's work, but more than that, they are an outstanding contribution to the study of botany in New Zealand and an important addition to any library.

In her Preface the author says in part,
my aim has been always to help people learn about the wonderful and unique plants of this country, and to help them learn to love the forested and alpine areas as I do. So much pleasure comes from the natural beauty of the environment but it all needs protecting. Knowledge, as well as sentiment, is the key to conservation.

Audrey Eagle was appointed a Companion of the New Zealand Order of Merit for her services to botanical art in June, 2001. I am sure all who view these new books will agree this was a richly deserved honour. 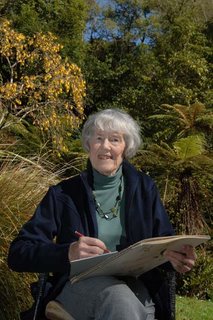 Michael Szabo reviewing the new Te Papa Press title in the November issue of Forest & Bird said:
The production values embodied in the two volumes and slipcases are second to none.
At $200 not everyone will want to buy it. If , however, you have a passion for botanical illustrations then you will be well served by this definitive book.
http://www.forestandbird.org.nz