These two titles were published back in the mid-70's by Jonathan Cape Ltd in the days when this great publishing company was not part of a huge multi-national and I was a young bookseller in Napier.If I hadn't been a bookseller I doubt whether I would ever have come across them.They did not cause a great splash in New Zealand!They did however cause me to chuckle.

They were long poems, Felicty Fark for example ran to 1800 lines, composed in rhyming couplets, and they were written by someone of whom in those days I had never heard, but went on to become internationally known as a writer of books and for radio and television, and then to become a televison presenter and comic,in fact later he became a media star by any definition, I write of Clive James.

I thought about these books the other day ,and remarkably was able to find them on my bookshelves, because I have been reading the latest title in Clive James autobiographical sequence, NORTH FACE OF SOHO - Unreliable Memoirs Volume IV (Picador). 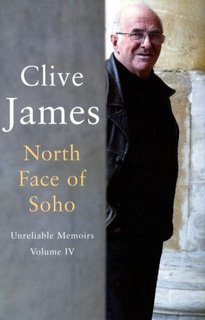 Each of the earlier volumes has sold around a million copies, a pretty remarkable sales achievement,and while there can be no doubt that his televison fame would have hugely boosted sales, one must also acknowledge that behind the face of the clown, (and I did get sick of his corniness on TV in the end),there is a very bright, sometimes serious guy who can write in a most entertaining and apparently effortless style.

He has more than 40 books to his credit, works of fiction, poetry,criticism, travel as well as the memoirs. He is no slug. And if you Google him you'll find he has 3.8 million entries.

He was born in Sydney and after graduation from the University of Sydney worked on the Sydney Morning Herald. In 1961 he moved to England which he made his home and while widely travelled and with countless trips back to his homeland he has remained in England ever since.He has been married to a Cambridge academic for 38 years and they have two daughters.He lives in an apartment near the Thames in London in a converted warehouse which not surprisingly is full of books.

This new volume is as funny and entertaining as its predecessors. It starts in London in 1968 with his arrival as a frelance journalist, recently married, reviewing books for the New Statesman and New Society.

James is remarkably frank in this new work and while he keeps away from writing of his wife and daughters,(this is a no go area,and you can't help but wonder how he has managed to keep his private life private while being such a high profile celebrity, I'm sure he's the envy of many other celebs),he does speak candidly on many subjects e.g here he is on marriage and the concept of monogamy quite early in the book:

"Marriage to a beauty had done nothing to blind me to the beauty of all the women I had not married:far from it.If my libido could have been given a face, it would have been the face of Robbie Williams singing a one-night date at a training camp for cheerleaders".

He speaks warmly and admiringly of Spike Milligan. Here he is describing the night that Spike asked him out to dinner in South Kensington:

"His Australian wife told me, on the way into the deeply fashionable restaurant, that Spike was currently on a plane of psychological equlibrium, held there by various carefully matched antidepressant pills. She thought she could promise me a relatively uneventful evening.'Just tell hime your stories about Auatralia, he loves that'.
So I did my numbers about the snakes and spiders, and the great man did seem to enjoy himself, effortlessly topping my yarns with his vivid memories of Woy Woy. But he tempered his laughter to the dignified ambience of the restaurant, and when he told stories of his own they were accompanied only by a small range of gesture, even when he was evoking a Messerschmitt 109 that had strafed him in North Africa.He drank water and made no fuss.
Only the famous Italian actress,surrounded by a protective retinue at a corner table, needed to be told who he was.Everyone else including the Foreign Secretary knew that a giant was present, and behaving beautifully".

Musing about writing his autobiography he says:

"In Cambridge I would sit in the Copper Kettle, writing down my memories of being a failure at high school while Stephen Hawkins hummed past outside with equations for the birth of the universe spinning in his head.In the Barbican I would sit in the sill-free window and conjure the kookaburras of childhood while ducks came in to land on the lake for the next round of their world crapping championship".

This volume ends in 1982 by which time he is certainly something of a media star and enjoying one of the highest profiles of the many famous ex-pat Aussies scattered around the globe.

Entertaining, thoughtful, engaging, NORTH FACE OF SOHO is all of these things, and more.It will undoubtedly be another best-seller, sure to find its way into many Christmas stockings, especially for Dads and Grandads.

I have one criticism - I reckon he should have kept writing for another year or so, doubled the size of this book and brought us into the current century.There is a significant element of frustration at being left back in the early 80's!
Posted by Beattie's Book Blog at 1:53 pm