AS THEY SAY IN ZANZIBAR - Proverbial Wisdom from Around the World
by David Crystal - Collins - NZ$35.00 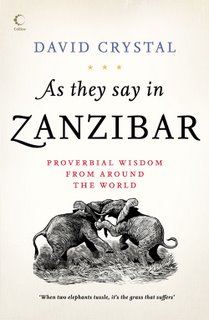 What a great title.

Author David Crystal was at Victoria University in Wellington in September.
He came as the first Ian Gordon Lecturer. One of those attending told me that his three lectures were standing-room only events; and they were all delivered – word-and-grammar-perfect - without a single written note.
Now that is impressive.

Professor David Crystal is one the world's foremost experts on the
subject of language. In 1995, he was awarded the Order of the British
Empire for services to the English language.He is Honorary Professor of Linguistics at the University of Wales, Bangor and these days divides his time between work on language and work on general reference publishing.

I have quite a library of books of quotations and similar reference works that I have acquired over many years of working in the world of books and language.At last count I had around a hundred or so.
Included among those I use most are:

To these will now be added As They Say in Zanzibar.

One of the most important things about a book of quotations is the ease with which it can be used. The way in which the book is indexed - by author's name, theme,keywords etc - can determine how user-friendly it is. I have owned some that have been pretty much useless in this regard.

David Crystal's book however is exemplary in this regard.It is a huge and most comprehensive collection of proverbs from around the world in which he follows the most frequently used method of sorting - thematic classification. Following his useful introduction on the history and use of proverbs he then lists all the themes in the order that they appear through the book.BUT at the back of the book he then provides a further five indexes covering 120 pages.It is the most comprehensively indexed reference book I have ever come across.

Here are just a few favourites that I hadn't heard or read before from
As They Say in Zanzibar:

Better ask twice than go wrong once - Germany
An untouched drum does not speak - Liberia
New born calves don't fear tigers - China
The sun shines on both sides of the hedge - England
Eggs and vows are easily broken - Japan
A cask of wine works more miracles than a church full of saints - Italy
A north-easterly wind is heaven's broom - Estonia
If they do not open after three knocks, do not wait - Poland

It is a treasure trove, a great dipping book.
Posted by Beattie's Book Blog at 5:44 pm

Hi again Bookman, still enjoying myself scrolling through your site and had to comment on this selection - As they Say in Zanzibar - too. Have you come across 'The Meaning of Tingo'? If not I suspect it will do well on your shelf!

Thanks Gina L, haven't seen this one, will check it out.