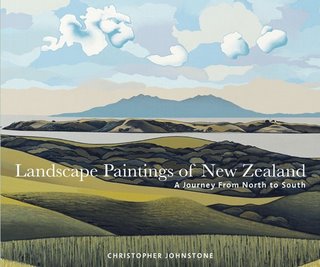 Last Thursday evening at 6.00pm an unseasonal storm lashed Auckland with a ferocity that saw mature trees blown over, power lines down with electricity cut to over 20,000 homes, flooding and mayhem on the motorways as drivers battled the peak hour traffic and the elements.

It was an inauspicious time to be launching a book one would have thought. But the weather didn't prevent a large gathering at the splendid Parsons Bookshop below the New Gallery on the corner of Wellesley and Lorne Streets. Neither did the weather prevent a most enjoyable function.
Nicol Legat, commissioning editor at Godwit, introduced the author who spoke briefly,(further comment following this piece), and then the book was launched by John Coley, former long-time lecturer in art education, artist, art critic and former director of the Robert McDougall
Gallery in Christchurch.

Christopher Johnstone is a writer, art historian, curator and art consultant. He is well known in Auckland art circles from his time as Director of the Auckland Art Gallery 1988-1995 during which time he was responsible for a number of hugely successful exhibitions including Picasso in 1989 and Rembrandt to Renoir in 1993.

His extended and thoughtful introduction to his new book is a stylish essay on the history and development of New Zealand landscape art. I was especially interested in his comments on the controversial Kelliher Art Award, a "short-lived but important development" as in my younger days it was through the Kelliher that I first became interested in New Zealand art.

Over this past weekend I spent an instructive and enjoyable 13 hours reading and viewing Landscape Paintings in New Zealand. This may seem like a long time but in fact I later calculated that this meant I had spent only eight minutes on each painting and accompanying text.

The text accompanying each painting provides biographical notes on the artist and then a description and backgrounder of the painting. Each deserves at least eight minutes!

In between much of New Zealand is covered with paintings that range in date from the days of early European settlement through to the present day. There are paintings that are both well known while others from private collections few would have seen previously.

Art critic and commentator John Daly-Peoples writing in NBR November 10, 2006 said "the book is full of useful comparisons and contrasts between the historical and contemporary and between the various stylistic approaches.
One can compare the three views of the west coast just out of Wellington with Robin White's Paramata Landscape, Cedric Savage's Titahi Coastline and Nugent Welch's The Coming Storm".

This is an interesting exercise and further comparisons can also be made with multiple works in the Otira Gorge area and in the Nelson district.

The selection policy and process, which I touch on with Christopher Johnstone in the interview that follows, is covered fully in "notes on selection" which follows the author's introduction to the book.
In these notes Johnstone writes, in part, "..... so one of the criteria for the selection of just 103 paintings from those available was that they should at least resonate with what viewers would see today if they were in the area".

With this in mind I was interested to read in the notes accompanying both Charles Blomfield's Evening Mahinapua Creek, Hokitika 1912, and Margaret Stoddart's An Otira Stream (Mountain rata) , a note to the affect that possum damage had since decimated many of the trees in the painting.

This is a most attractive piece of publishing,(it will be a most valuable addition to our growing library of books about NZ art and artists), it is beautifully designed, and I'm pleased to note French folds have been used which will serve to protect the cover featuring Don Binney's iconic 1984 work, Tiritiri Matangi from Whangaparaoa.
Included is a glossary, select bibliography,list of acknowledgements, and index, all of which are useful tools for readers and scholars alike.

My own favourite piece is Last Light on the Tukituki River, 2004
in which the artist presents us with a late afternoon shot of the slow-flowing river with the sun catching the hills in the background. This beautiful painting should really be on the walls of the Craggy Range Winery which is located nearby.
But being a true blue Aucklander I also have soft spot for Peter Siddell's Waitemata,1994 but truly the book is full of such appealing and captivating images.

Finally I must say something of the venue of the book's launch.

Parson's Bookshop is owned and operated by the husband-and-wife team of Roger and Helen Parsons and what a very special bookstore it is. They are specialists in books on the arts, particularly visual arts, and New Zealand books, and the scale and range of their stock in these areas is astonishing. They have a significant mail-order business, particularly with schools and libraries, and in the last three months they've begun selling reproductions with an extensive range of both NZ and International works in stock.

I recall clearly when they started in a tiny shop in Victoria Street in the late 1970's and the excitement it created because now we Aucklanders had a Parson's Bookshop too.
Roger's late father Roy, was one of the senior and most respected booksellers in NZ for many years and his Lambton Quay,Wellington bookshop had been a magnet for book lovers from all over the country.
Today that shop is operated by Roger's siblings Julian and Beatrice.
When the New Gallery opened in Auckland in 1995 Roger and Helen secured their present site, and it is difficult to imagine a more appropriate location.
There could not have been a better place to launch a book on New Zealand landscapes.
Posted by Beattie's Book Blog at 10:58 am

I am interested to read some of your blog Graham. I am involved in a small family-owned publishing company and noticed that you do some consultancy work within the industry. I wonder if you are open to advising me in some way, and if so, what your charges are.

If you give me an e-mail address Helen I will write to you.
Best,
Graham