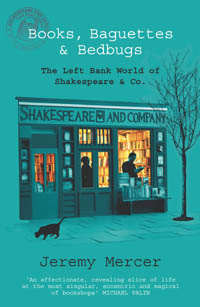 We were at the top of Montmartre. Behind us were the chalk domes and stone horses of
Sacre- Coeur; before us lay Paris, block after block, until the buildings blurred into the horizon.You could play spot the monuments with the Pantheon, the Louvre, the Opera, and if you leaned out along the rails, the iron grid of the Eiffel Tower. Just 12 hours before, I'd been in the frigid snow and ice of Canada, thinking only of making it to the airport and away.Now I stood above one of the world's great cities with the sun on my face and my future a blank canvas.

This from early in the book when Jeremy Mercer, former Canadian crime reporter, has arrived in Paris seeking a new life. Fortuitously he lands up at Shakespeare & Co. which if you are a book person and have been to Paris you almost certainly will have visited.

Located on the Left Bank, near Notre Dame and with a perfect view across to the Ile de la Cite where despite its chaotic and ramshackle nature, perhaps because of it, this second-hand bookshop is like a magnet to visiting bibliophiles.
Jeremy Mercer didn't go looking for Shakespeare and Co, rather he wandered in to escape the rain.

Paris was at its festive best that late December. A rivalry had developed between world capitals to see who could throw the best millennial party, and the city had taken to the competition with passion. Shop windows teemed with bottles of champagne and year 2000 novelty items; the Eiffel Tower had been mounted with sparkling lights and fireworks; the Champ-Elysees was linde with Ferris wheels that had been decorated by artists and sat cloaked beneath canvas until the fateful midnight struck.The lusty glow of optimism was everywhere.

And so begins Mercer's memoir of his time living rent-free in the bookstore with other writers who were down on their luck. He provides us with an interesting history of Shakespeare and Co, the original store of this name owned by Sylvia Beach having been closed by the Nazis in 1941, the story of another eccentric ex-pat American ,George Whitman, who started the existing store in 1964, and the way he has run it as something of a secular wayside chapel.

I am grateful to Gillian at UBS Bookstore in Christchurch who brought this book to my attention.$30 well spent.
I recommend it as an intriguing weekend read.
Posted by Beattie's Book Blog at 5:43 pm

As a person working in the retail book world I must say I found this title absolutely absorbing.

I think if you enjoyed this, you might also like to try 'True Pleasures', an account by a woman seeking out philosophers, writers, and others renowned for good or not so good deeds who lived in Paris at some point, and who have captivated her. Its both a well written and fascinating account of coming to grips with a different Paris.