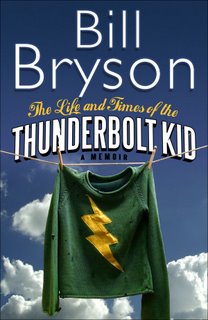 BILL BRYSON BACK IN NEW ZEALAND

Random House NZ has announced that they are touring the hugely popular author
19 -23 February 2007.

He will be here to promote his September 06 publication, The Life and Times of the Thunderbolt Kid,,NZ 55.00, as well as his quite significant backlist, all of which have been genuine best-sellers written over the past 10 years, amazing really, he must be a dream author for his publishers:

Full details of Bryson's tour will be available on the Random House NZ website from on 29 November:

and if you want some fun, including an audio/visual entertaining excerpt from his latest title then visit this site:

And don't forget Bill Bryson's invaluable guide to language and grammar, titled 'Troublesome Words'by Penguin Books. For anyone who has ever wondered whether to use owing to or due to, that or which, diagnosis or prognosis - Bryson explains the difference as well as giving advice on when to split your infinitive etc, in a concise and entertaining manner. Excellent resource! Every writer or editor should have one.

I love his introductory sentence in the book:

This book might more accurately, if less convincingly, have been called A Guide to Everything in English Usage That the Author Wasn't Entirely Clear About Until Just Recently.