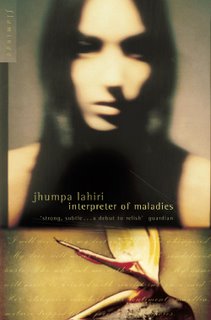 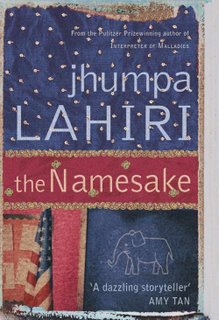 Three weeks back I warmly reviewed Jhumpa Lahiri's novel, the namesake, on my blog.
Subsequently Per Henningsgaard posted the following comment:

Indeed 'The Namesake' was Jhumpa Lahiri's highly anticipated (at least in the U.S., where I was living at the time) follow-up to her Pulitzer Prize-winning 'Interpreter of Maladies'. And as much as you clearly enjoyed her second book, I would wager that you enjoy her previous collection of short stories even more. This is a risky bet, I realise, since there seems to be a predilection among readers to favour the first work they read by a given author, above and beyond the works of that same author they may subsequently be inspired to read. Nonetheless, I suspect you will favour 'Interpreter of Maladies', particularly as I found it revealed many of the (less than immediately obvious) flaws in Lahiri's subsequent work. Specifically, Lahiri is a brilliant writer in the short story form, and the sheer brilliance of her performance in 'Interpreter of Maladies' highlights the stuttering approach of 'The Namesake'. I found the novel to be little more than a series of connected short stories, each of which lacked the focus and perfect control of the story arc and pacing exhibited in Lahiri's earlier work. The victim, perhaps, of a publishing industry that favours the novel over a collection of short stories, as publishing wisdom would have it that the latter doesn't sell (though this wasn't the case with 'Interpreter of Maladies', which sold extraordinarily well).

Lucky for us (or me, at least), when I was fortunate enough to work briefly with Lahiri a few years ago (she was serving as Writer in Residence at the university where I did my first degree), she informed me that she had already begun work on a new collection of short stories. Perhaps she, too, felt that her foray into the novel had not been an entirely successful one. But I would be interested to hear your thoughts on this matter, when you get around to reading 'Interpreter of Maladies'. Perhaps this comment will have even inspired you to turn your attention to it sooner!

Well,Per's comments did inspire me to read interpreter of maladies and I readily agree with Per's assessment of her as a very fine exponent of the short story form.

There are nine stories in the collection and every one of them is a gem.No wonder then that she won the 2000 Pulitzer Prize for fiction for this title, and was also nominated for the O.Henry Award and Best American Short Stories Award. It also received the PEN/Hemingway Award, the New Yorker Debut of the Year Award, and an American Academy of Arts and Letters Award, and a nomination for the L.A.Times Book Prize.She was awarded a Guggenheim Fellowship in 2002. Whew!
Punch interpreter of maladies into Google and you'll find 167,000 entries ,many of them reviews, and those I read all singing the book's praises.

For the record Jhumpa Lahiri was born in London in 1967 of Indian parents but was raised from a young age in Rhode Island.She studied at Boston University where she was received a Ph.D in English.She lives in New York with her husband and son.

What more need I say? If you like short stories, and I do, then you will find these stories utterly satisfying. I was left wanting more,so fingers crossed that her next collection is not too far away.
Posted by Beattie's Book Blog at 9:00 am