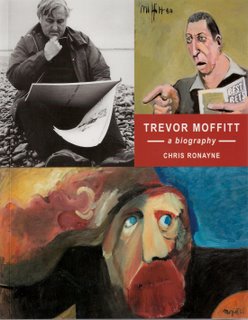 Being very much a layperson, albeit a keenly interested one, when it comes to the visual arts scene in New Zealand I had little idea of just how significant a player Trevor Moffitt is in this field.
The author for example quotes at some length long-time art collector and patron Dr.Bill Glass who regards the three greatest NZ painters as McCahon,Hotere and Moffitt, and he says why.

Trevor Moffitt is in my opinion one of NZ's greatest artists. I have been a collector and art dealer for over 20 years. Apart from personal taste and preference what dealers search for is a point of difference - the X factor - something unique. This is what puts leading artists above the millions of other artists practising and trying to break through throughout the world. Trevor's got the x-factor in spades.From a NZ art perspective Trevor is a stand-out artist.....(he) has indelibly portrayed and cast a "New Zealand way of life" in oils.

Only an authorised biography can gain the wide access to the subject's life that Ronayne has managed here. The book is profusely illustrated with both black & white photos from Moffitt's interesting life and with numerous reproductions of his distinctive art mostly in colour..
I was especially drawn to his No son of mine goes to University 1980 which reflects his father's view from years before that he should leave school as soon as he turned 15 years of age. 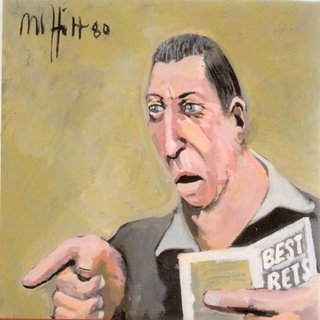 In a way this biography is a look at the NZ visual arts scene from the 50's to the present day.


Look at some of the participants in this photo,reproduced in the book with permission,from the Christchurch Art Gallery Collection,William Sutton Archive of Sutton,Hanly,Moffitt and Hotere - 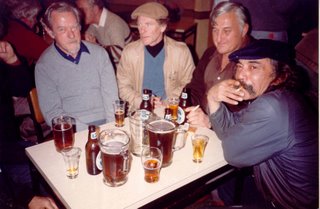 Included among the numerous people from this era who are mentioned, or in some cases quoted, are ,in no particular order:

At Labour Weekend we visited the Eastern Southland Gallery to view The John Money Collection (see my review of 30 October)and I was interested to observe that they had on display their five Moffitt's - three Hokonui Moonshine works,(from the Hokonui Moonshine Series exhibition held there in 1998, and covered in the book),a Southland Series Two work from 1988, and an earlier Rakaia River work which was bequested to the Gallery.

In TREVOR MOFFIT - a biography Chris Ronayne has left him a fitting memorial to go alongside his significant body of wonderful paintings.Ronayne is also the author of a biography of another renowned artist and art teacher, Rudi Gopas.

In conclusion something about the publisher:

The company was established in 1992 and publishes up to ten new books a year.
Pretty much everything is done in-house (literally, as David operates from home). He employs a regular freelance designer and, less frequently, an editor to assist with larger projects and a publicist to assist with marketing. Warehousing, sales and distribution are contracted out to David Bateman.

Main interests are history, biography, Maori and Pacific, maritime, aviation and fiction but he publishes outside these areas when something takes his fancy. Some of the significant books published under the company’s imprint are:

The company website http://www.davidling.co.nz gives a more detailed view of the range of publications and activities.

From 1985 to 1992,David Ling was Publishing Director at Random Century/Random House New Zealand, where amongst other initiatives he created the Vintage NZ imprint and before that was Editorial Director at Heinemann Publishers from 1977 to 1985.
And even before that he and I worked in the same building in Wairau Road, Gelnfield when he was Senior Editor at Longman Paul and I was Sales & Marketing Director at Penguin Books NZ. And he regularly beat me at darts during our lunch break!
Posted by Beattie's Book Blog at 2:20 pm

I'm so pleased to see David Ling has published a book about
Trevor Moffit. I've long been a fan: I remember seeing one of Moffit's
paintings in a private collection: of a rather substantial man standing up
to his waist in a river. The river looked like the Clutha - it was such a
peaceful and profound work. You could almost feel the force of the river
surrounding the figure.

I enjoyed the book very much - several friends have paintings of his which I've always found quite disturbing esp the series of the bunny being blasted - no doubting his talent though - and it's good to see Trevor's work being acknowledged and made more accessible.

I enjoyed this read, the character of Moffitt is fascinating. The story comes together well. It is a shame it was not published earlier. Moffitt is reasonably well known in the South Island. Everyone has most probably seen his Mackenzie the sheep stealer painting.
A couple of years back I saw a Moffitt painting in a gallery for the first time. It was a gold miner series painting showing a shopkeeper. Very powerful it really stood out. It sold quite quickly for a high price.

Since then I have sought out some of his gallery paintings (1 in Aiganthile in Timaru and quite a few in the CHCH Art Gallery) I simply emailed the curator and arranged a visit.
Marvellous works. Favourite is probably the huge Southland landscape in CHCH gallery. It is extremely well painted and not in the more common impressionalist style. I love the thick brushstrokes and the deft aggressive stokes.

Although a pauper I now own one of his paintings, and yes I enjoy watching the way the picture seems to change as light levels change throughout the day. Moffitt's are best viewed from a distance.

Moffitt is indeed a great painter IMHO. I prefer his 1980-early 1990's works. He really captures the S Island character with the my father's life series. The lemon squeezer paintings are very powerful. The Stan Graham series is also very powerful although very dark. The solo father series I find a tad sad. I think some of the Canterbury paddock series are thought provoking. I grew up in Canterbury and the scenes are erringly familiar.

Other classic Kiwi painters I enjoy include Angus, McCahon, AA Deans, G Wheeler, Badcock etc etc. I am not a young fella and confess that I am distantly related to TM.