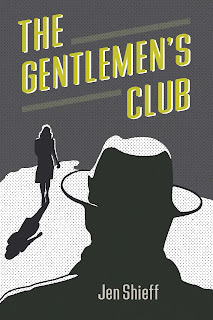 Headstrong and independent, Rita Saunders is a warm and colourful character, a successful hairdresser by day and a busy brothel madam by night. The only thing missing from her life is the love of a good woman.

Istvan Ziegler is a Hungarian immigrant who has come to New Zealand full of anticipation to work on the new harbour bridge.  His hopes and dreams become temporarily dashed when he comes up against 1950s NZ, where foreigners rarely gained entry to 'the club'.

The title 'The Gentlemen's Club' plays with the idea that respectability can be just a veneer, while suggesting that Rita’s brothel, and Rita herself, have a level of respectability they couldn’t claim for themselves.

Jen Shieff was an analyst for several government departments, writing reports for ministers of the Crown. In 2014, she decided to stop thinking about writing fiction one day – and do it. The Gentlemen’s Club is Jen’s debut novel, and she envisages it as the first in a crime fiction series set in Auckland between 1957 and 2017.

In writing The Gentlemen’s Club, Jen says she was influenced by Auckland’s famous madam Flora MacKenzie. ‘Flora appealed to me because of her independence, her outsider status, the waves she caused and her ability to survive slings and arrows.  She, like my character Rita, had an unfailing belief in the value of the work she and her girls did and probably knew, decades before NZ’s parliament did, that it shouldn’t have been considered a crime.

‘In doing research for the book, I discovered that Flora left her landmark property in Ring Terrace, St Mary’s Bay, to the man who delivered her whisky. When I could find no public record of him, I invented him as Istvan Ziegler.’

Reviewed by Louise O'Brien on Radio NZ National this am.
Posted by Beattie's Book Blog at 1:49 pm