We Are All Made of Stories 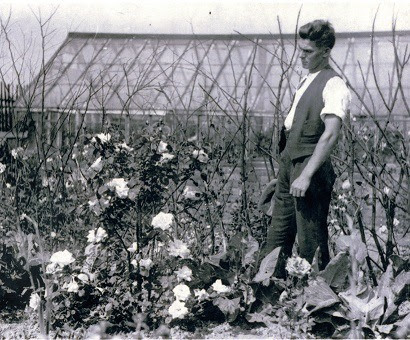 Reading my piece about berries again made me think of my grandfather. I often think of him especially at this time of year, when the blackberries and currants are out, and the trees are heavy with ripening fruit. He was a big influence in my life; my parents were both teachers (my mother had given birth to me on a Friday morning and gone back to school on the Monday) and my grandparents looked after me when I was a child.

Their house was only a few doors away, on the other side of the road, and I spent a lot of my time there, helping my grandfather in the garden, or picking blackberries with him, or “going scouting”, as he called it, by the village pond or on the far side of the railway line, which usually meant collecting things; found objects; bottles; cans; or things to use in the kitchen - wild spinach or elderberries or mushrooms, or watercress - whatever happened to be in season at the time.

My grandfather was a firm believer in recycling, long before the word was in use. His garden was filled with pots and pans; old tin cans; old bathtubs; pieces of plastic and tinfoil tied to the trees to frighten the birds. He was very ingenious; nothing was ever thrown away, and he was constantly on the lookout for new ways to re-use the kind of thing most people class as rubbish.

I remember some of his experiments; the well he built in the garden, thirty feet deep and lined with bricks; the beehives he kept, having taught himself about beekeeping from a book (in spite of having left school at twelve); the strange and occasionally perilous gadgets he made to save electricity; the foul-smelling candles he tried to make, using the red wax from Edam cheese.

And the wine, of course. And the jam. And the pickles, chutneys, preserves. But mostly the demijohns of wine that he kept in the back room, where he stored the winter apples carefully wrapped in newspaper so that the whole house smelt of them; a sharp and slightly fermented scent mixed with the scent of old clothes, mothballs and sour damp.

He had a story, not like that of my other grandfather in France, who had been a hero during the war, but a story just as heroic in its quiet little way. And because both he and I liked stories, and because we were so often together, I picked up the story of his life during our expeditions, in between learning about gardening, or spotting birds, or fishing in the flooded mine-shaft that had been a pond for so long that most local people had no idea that twenty men had died there once, and that most of them were still there…

We are all of us made of stories. Those of you who have read my books may know of one called Blackberry Wine, the story of an old man, a boy and a dozen bottles of home-made wine. It’s not quite the story of my grandfather, but the main character, Joe Cox, is very like him in many ways. This is my grandfather’s story. It’s also one of the many tales that have helped make me who I am. I’ve never written it down before, although I’ve told it a few times at readings and Q & A sessions. I hope you like it - it’s all true.
More
Posted by Beattie's Book Blog at 7:18 am