Explaining the complexity of the English language

Why is a spork called a spork rather than a foon? Why do we pluralise avocados without an ‘e’ yet add ‘es’ to tomatoes? 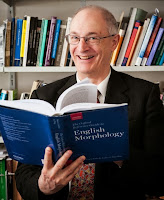 Morphology is the branch of linguistics that studies patterns of word formation, and attempts to formulate rules around these patterns.

“For instance, with a word like ‘friendliness’ you can chop it up into ‘friend’, ‘li’ and ‘ness’ and everything means something,” says Professor Bauer.

“Likewise ‘brunch’ is made up of ‘breakfast’ and ‘lunch’. For some words though, such as ‘elephant’, there’s no structure in English that makes it mean what it means.”

In the English language, exceptions to the rules abound. “Imagine you are at Disneyland looking at stuffed toys—Donald Ducks and Mickey… Mouses, right? Yet a foreigner would have learned that the plural of mouse is mice in all circumstances. There are so many complications in the English language that have never really been explored before. That’s what our book attempts to do.”

The book offers the first comprehensive description and analysis on English morphology. As well as analysing dictionaries, the researchers drew on the Corpus of Contemporary American English and the British National Corpus, which contain vast samples of written and spoken English from a wide range of sources.

“There’s material there which doesn’t make its way into dictionaries and it’s an excellent resource for extracting patterns in language,” says Professor Bauer.

“For example, it’s possible to search for all the words ending in ‘ity’. Or we can find all words starting with un- and in- or a- and non- to see whether there’s a difference in meaning.”

The Marsden-funded book was written over three years in three different countries, with the researchers liaising over email and talking regularly via Skype, as well as meeting up once a year, each time in a different country.

“All three of us have been working in English morphology most of our academic lives, so between us we are drawing on 100 plus years of experience—and with each of us working on the book for three years you could say that the book actually took nine years to write,” says Professor Bauer.

“We haven’t solved all the problems by any means but we’ve certainly got much further than ever before.”

For more information contact Professor Laurie Bauer on 04-463 5619 or laurie.bauer@vuw.ac.nz.

Footnote:
Publisher Oxford University Press.  £90  in the UK or US$170