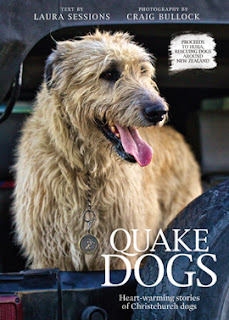 
Pupcakes courtesy of Topdog Barkery; a complimentary ‘brush and bow’, nail clipping or teeth brushing; soothing acoustic music; and other well-deserved doggy and human indulgences will be served up at a very special Christchurch party on Saturday, 5 October, to celebrate the publication of a very special collection of stories which has also now been optioned for a television series.

For those lying injured under the quake rubble, the sound of a USAR dog bark was the sound of hope; for the elderly living alone during the quakes,huddling together with their canine companions brought mutual comfort in the lonely and frightening dark. There were the dogs who fled their family homes in terror never to be found again; there were the abandoned dogs, taken in by complete strangers who also took care of their vet bills;
there were those who ran miles to find their families; and there were those who were so traumatised that they had to be rehomed with families in other cities. Some were trapped in liquefaction being sucked at like quick sand; there’s a dog who still today warns her family that another after shock is on its way by rushing out into the garden; others have continued to suffer from sustained post-quake trauma and sadly, three dogs included
in the book have recently passed away losing their two year battles.

Gracing the book’s cover is Guinness, a very familiar scruffy face who appeared regularly in the TV news updates. The enormous, shaggy Irish Wolfhound became the pin-up boy for the Student Volunteer Army and he was awarded a medal for his work with their rescue effort.

It’s a book with a very big heart at its centre. It ultimately celebrates the very special, wordless bond between people and their pets which is one founded on love, trust, loyalty and companionship.

The Christchurch earthquakes, the on-going aftershocks and their devastating aftermath changed southern lives forever. It also changed the lives of our beloved dogs. Cantab writer Laura Sessions and photographer Craig Bullock have teamed up to gather together this very moving collection of stories because, as animal lovers themselves, they felt that this was a quake story that had remained untold. Called Quake Dogs, some of the proceeds from the book go to HUHA, the national organisation that works to rescue and re-home animals around the country and who successfully relocated at least 70 quake dogs.

Laura says that she first began collecting stories for the book shortly after the February 2011 earthquake.

“There were a few well-publicised animal stories at the time, but no one seemed to be reporting — or even talking about — the vast majority of what dogs in the city were going through. In talking with people, I began to realise that dogs had been affected in just about as many ways as humans.

“At the same time, I also began to realise that in telling me about their dogs’ stories, people somehow found it easier to open up about their own experiences, something they probably wouldn’t have done if I had been asking directly about what they went through. The dogs’ stories became interwoven with human emotion, pain, laughter, grief and gratitude at what was left.

“One of my favourite themes that emerged while I was writing the book was how close people became to their animals when tragedy struck. People relied on their dogs for emotional support, companionship, and stability. Many people told me they could not have made it through the two years of quakes without their dogs.

Photographer Craig Bullock, who specialises in pet portraits, says meeting and photographing the dogs for the book has been an incredible and inspirational experience for him: “I will always remember each of their unique personalities.” 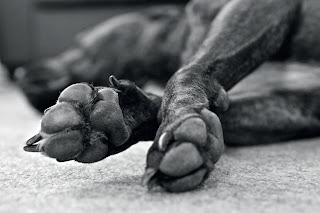 Easy and his USAR handler, Brenda, worked a day and a half straight searching for the injured lying beneath the rubble


With the chaos around them, Guide dog Kiwi remembered his routine and walked Blair down the stairs and out of the building 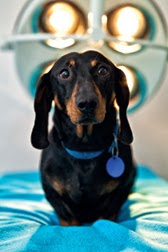