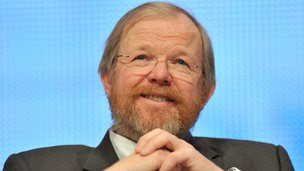 Author Bill Bryson has called on publishers to give away e-books when people buy the printed versions in order to boost sales of physical books.
The travel writer said he resented being "forced" to choose digital books over print because e-books were more convenient to take on the road.
"It would be such a terrible thing to lose physical books," he told BBC News.
"That's the direction we're heading in because publishers are not responding as effectively as they ought to."
The "solution to the industry's malaise" is to give buyers a free download code when they buy a printed book, he said.
His comments come weeks after Amazon announced a plan to offer buyers of printed books in the US a free or discounted digital version. Similar schemes have been rolled out for magazines and music.
"If they [publishers] don't move to that really quickly people will be forced to take the digital version whether they really want to or not," Bryson said.
"Somebody gave me a digital reader as a gift last spring and I now find that when I'm travelling I take digital books with me.


Bryson was speaking at the Booksellers Association conference ahead of the publication of his latest book, One Summer: America 1927.
More
Posted by Beattie's Book Blog at 7:49 pm