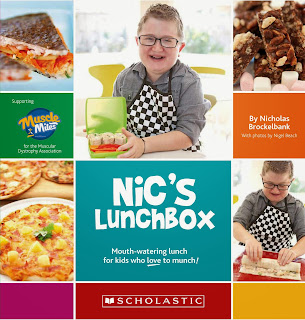 Scholastic New Zealand has once again teamed up with inspirational child chef Nicholas Brockelbank to produce a second cookbook, Nic’s Lunchbox, this time with a range of quick, easy and delicious lunch ideas.

Nic lives with muscular dystrophy and in 2012 and 2013 was the ambassador for the Muscular Dystrophy Association (MDA) Bow Tie Appeal with Judy Bailey (the Patron for the Muscular Dystrophy Association). Nic featured in the television campaign and on posters and billboards throughout New Zealand.  Nic and Scholastic NZ are again donating half of the royalties from sales of the book to the MDA.

Since the publication of his first book, Nic’s Cookbook, in October 2012, Nic has held a sell-out book launch, made guest appearances on TVNZ’s Saturday Breakfast, What Now and Attitude TV, and performed in-store cooking demonstrations assisted by celebrity chefs Simon Gault and Brett McGregor.

Nic’s Cookbook has been a regular feature in the top 10 NZ children’s bestseller list, and it won the 2012 Best Fundraising, Charity and Community Cookbook category of the strongly contested Gourmand World Cookbook Awards for the Pacific region. Previous New Zealand recipients of these awards include Annabel Langbein, Brett McGregor and Jo Seagar.

Nic was encouraged by a schoolteacher to use cooking to improve his reading, spelling and maths. He enjoyed it so much that he put together his first ‘cookbook’ when he was eight years old, as a Christmas gift for family and friends. This photocopied booklet of recipes was so popular he set up a website (www.nicocool.com) to sell recipe books and artwork to raise money for various charities. The website also describes aspects of Nic’s life with muscular dystrophy from his personal experiences.

Nic’s Lunchbox will be celebrated at a launch event at the Red Cherry Café in Cambridge, at 2.30pm on Saturday 5 October 2013. Samples of some of the recipes will be provided for guests to try. Both books will be on sale and Nic will be signing copies. All are welcome to attend.
Full colour paperback - $10.00
Posted by Beattie's Book Blog at 11:42 am