WHEN A COMIC STRIP IS NOT SO FUNNY: former poet laureate moved to tears by debut novel. 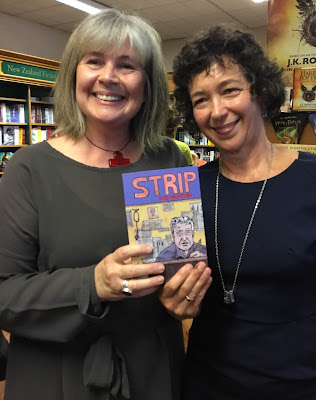 
Vincent said the novel was intricate, challenging and provoking and took the reader into a ‘moral web’ that New Zealand fiction doesn’t always enter so starkly. He  said he admired how a terrible error on the part of the protagonist nonetheless drew ‘a deep sympathy’ from the reader, and at one point the former poet laureate was compelled to stop reading ‘as the pages blurred with how movingly the details came in on one’.


Strip is about Harvey, a doctor who hangs up his stethoscope to draw comic strips, and later becomes at an-home father for their adopted daughter, and life is good. But when his family is threatened, he acts to protect them in ways that are morally questionable and have tragic consequences.


‘We always say, don’t we,’ said Vincent O’Sullican, ‘that it’s a fine achievement in fiction when we suspend our disbelief as the strength of the telling convinces us. But it is an even more impressive occasion, I think, when an author is able to let us go of our instinctive prejudices and moral certainties in a wider tide of sympathy as characters entangle themselves in wretchedness, so it is not the mistakes that hold us, but what you might call the low-key heroism of doing wrong while trying to do right. New Zealand fiction doesn’t always take us so starkly into this moral web.’


Strip is a novel that addresses a public issue of medical morality – euthanasia for those whose lives are deeply compromised by ill-health – and looks at the private issue too of how far people will go for the ones they love. It was inspired by Wootton’s previous career in the medical profession, and her interest in writing about the public and private notions of right and wrong.


‘In Strip, devastating events are set in motion by a few small initial errors of judgement,’ she says. ‘The story is about motives and mistakes, conscience and culpability, lies, truth and love. At what point does an action cross the line between right and wrong? What about an inaction? And what if in intending to prevent harm to one person you do harm to another?  Harvey is responsible for more harm than anyone else knows. There’s his public—and very topical—crime but there is also his secret, private one. Both have ramifications he never dreamed of and did not intend.”


Sue Wootton is an award-winning poet and fiction writer with a background as a physiotherapist and acupuncturist. Her prizes include winning the Aoraki Literary Awards for both poetry and fiction, and second place in the Hippocrates Prize for Poetry and Medicine. Her combined interests inform her current PhD studies at Otago University and a blog she co-edits called Corpus, both of which explore the nexus between creative work and medicine.


Strip is published by Wellington’s Mākaro Press, which Vincent O’Sullivan said had quickly become ‘an invigorating cultural force’. The press worked with students from the Whitireia Polytechnic publishing course to produce the novel.
Will be enjoyed by readers with an interest in: New Zealand  fiction • the nexus of medicine and the arts • the issue of childlessness and adoption • the issue of euthanasia.

Posted by Beattie's Book Blog at 8:43 am

Have you read it Graham or know whether the novel comes out 'broadly' for or against euthanasia itself?