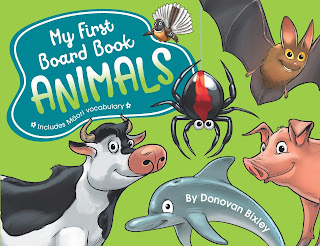 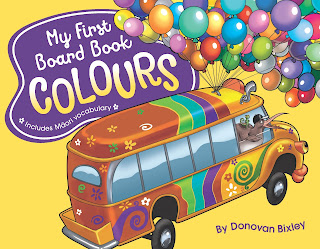 Hachette NZ is thrilled to announce the My First Board Book series by Donovan Bixley, which is the perfect bilingual introduction to books for Kiwi kids.
The project came about after Hachette NZ observed a lack of books for very young readers that featured both English and Te Reo.

“We saw a gap in the market for beautifully designed, accessible books in Te Reo for young children and were thrilled that Donovan Bixley was also keen to work on these with us,” says Melanee Winder, Hachette NZ Sales and Marketing Director.


The series launches with two books: My First Board Book: Colours and My First Board Book: Animals and features the award-winning artwork of acclaimed New Zealand illustrator Donovan Bixley.
“It’s great that tamariki can learn their first words in English and Te Reo with characters they have met from some of my other books," says Donovan of his involvement.


Donovan’s distinctly Kiwi characters will already be very familiar due to his bestselling children’s books The Wheels on the Bus and Old MacDonald’s Farm, which have sold more than 100,000 copies since publication.
Colours is based around the iconic Kiwi song ‘Mā is White’, with the inclusion of additional colours not included in the original song.
Animals helps kids learn animal names in both English and Māori. It features the usual suspects including cow (kau), horse (hōiho) and sheep (hipi), but also bat (pekapeka), gecko (moko pāpā) and morepork (ruru) plus many more.
There are plans to grow the series with two new books scheduled for next year looking at shapes and machines. My First Board Book: Colours, Donovan Bixley ($16.99 RRP)