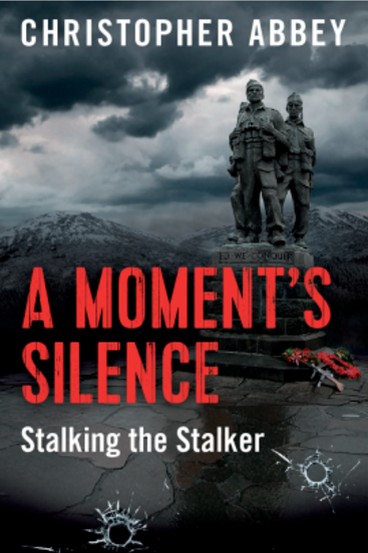 A Moment’s Silence
by Christopher Abbey

A poignant premise underlies the title, A Moment’s Silence. What legacy do we leave behind – a life fulfilled or one that goes almost unnoticed by others?
New Zealander Martyn embarks on his middle-aged OE after his corporate career and thirty-year marriage implode. Picking up the pieces he’s re-established himself with an accountancy consultancy, a new home, and custody of the cat. With business going well, Martyn decides to reward himself with a belated OE in England, but he encounters far more adventure than he’s anticipated when he reports a suspicious sighting to the police. Now he’s the target of a mentally unbalanced IRA hitman who’s gone rogue.
A lonely man, Martyn’s drawn romantically to Sergeant Elizabeth Candy (off-camera style romance), but there’s the complication of the hitman’s relentless pursuit hanging over things.
The storyline is based on real events, and the author has skilfully woven fact and fiction, and backstory together, creating a compelling tale with his vivid writing style. Martyn’s travel itinerary and his tourist meanderings are shown in sharp contrast to the movements of the vindictive killer stalking him.
A well thought out thriller, brimming with suspense, and lifelike characters. I would read more by this author.
Flaxflower Review by Wendy Scott
Title: A Moment’s Silence
Author: Christopher Abbey
Publisher: Mary Egan Publishing
ISBN: 978-0-473-36189-1
RRP: $34.99
Available: print: bookshops; ebook: via Amazon
Posted by Beattie's Book Blog at 11:38 am