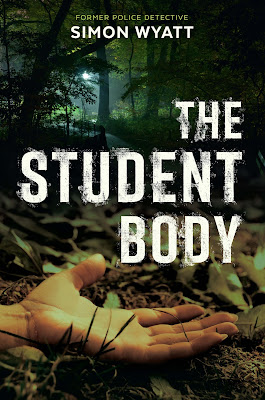 When the body of a schoolgirl is found in the bushes on Auckland’s West Coast, the shock sends a community reeling.
Who would want to hurt this popular high-achiever?

Nick Knight, a week into his role as newly promoted Detective Sergeant at Henderson Police Station is tasked with leading the Suspects Team.
Nick – who turned his back on a lucrative career as a lawyer - is well versed in dealing with the dark side of human nature.
Setting a cracking pace on the trail of the murderer, and grappling his own demons along the way he is determined to find justice and nail the culprit.

This authentic police procedural thrusts the reader into the machinations of Auckland’s working police force, school politics, the city’s legal profession and gang culture, in a tragedy triggered by lust and obsession.
The Student Body is compelling and convincing with Wyatt’s intimate knowledge of NZ crime, his portrayal of comradeship within the force and the dark humour that goes with it.
Brilliantly presented and action-packed throughout, The Student Body, is a terribly good story and I especially enjoyed the local setting..

About the author: Raised in Glendene, West Auckland, Simon Wyatt enjoyed a decade-long career with NZ Police, the last six of which he spent as a detective in the Criminal Investigation Branch (CIB). This was interrupted when Simon contracted the rare and potentially life-threatening autoimmune disorder Guillain-Barre Syndrome.
During his recovery he set himself the task of writing an authentic murder mystery, one he would love to read himself. Currently an investigator for the Serious Fraud Office (SFO), Simon is working on his second novel.