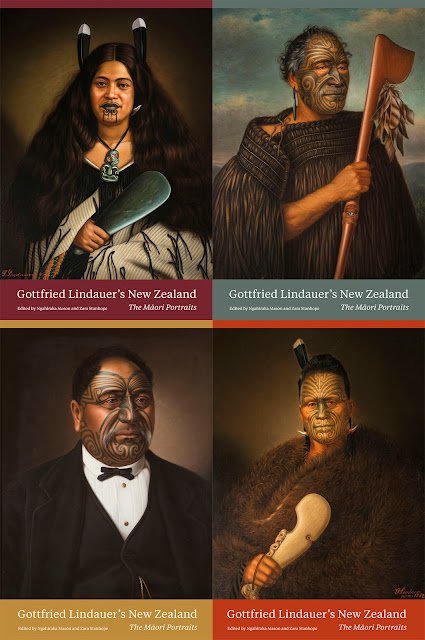 Four different covers - choose your own !


Co-produced with the Auckland Art Gallery to tie in with a major exhibition of Lindauer’s Māori portraits.


From the 1870s to the early twentieth century, the Bohemian immigrant artist Gottfried Lindauer travelled to marae and rural towns around New Zealand and – commissioned by Māori and Pākehā – captured in paint the images of key Māori figures. For Māori then and now, the faces of tūpuna are full of mana and life. Now this definitive work collects those portraits for New Zealanders.


The book presents 67 major portraits and 8 genre paintings alongside detailed accounts of the subject and work, with essays by leading scholars that take us inside Lindauer and his world: from his artistic training in Bohemia to his travels around New Zealand as Māori and Pākehā commissioned him to paint portraits; his artistic techniques and deep relationship with photography; Henry Partridge’s gallery on Auckland’s Queen Street where Māori visited to see their ancestors; and the afterlife of the paintings in marae and memory.
Auckland University Press , $75.00
Hardback, 310 x 206 mm, 284 pages,
colour illustrations,
978 1 86940 856 5


About the editors:
Ngahiraka Mason was born and raised in Te Urewera and was Māori curator at Auckland Art Gallery Toi o Tāmaki from 1999 to 2015.


The Exhibition:
More than 150 historic oil portraits of Māori and Pākehā will be shown at Auckland Art Gallery Toi o Tāmaki in the largest ever exhibition of work by artist Gottfried Lindauer. The Māori Portraits: Gottfried Lindauer’s New Zealand will feature artworks from the late 19th and early 20th centuries. It opens Saturday 22 October and entry is free.
NOT TO BE MISSED - QUITE WONDERFUL.


The exhibition celebrates artist Gottfried Lindauer (1839–1926), New Zealand’s pioneering and most prolific portrait painter and a key cultural figure in the country’s art history. It will bring together an array of finely-detailed portraits of Māori rangatira (men and women of standing in their communities) in both traditional and western dress, portraits of colonial settlers, and large paintings depicting Māori life and customs.


Lindauer’s personal history, from his art training and migration from Europe to his artistic inventions once in New Zealand, will be highlighted, bringing new insights to the relevance of his life’s work in the 21st century.