All for My Children 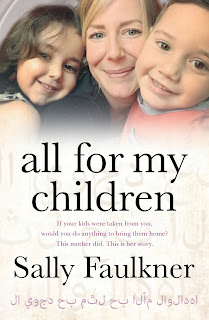 The unforgettable true story of how one Australian mother's fairytale life fractured in the instant she kissed her kids goodbye.
On Saturday, 9 May 2015, Sally Faulkner hugged her children as they left for a three-week holiday to Beirut with their father, Ali Elamine. Though Sally and Ali were separated, custody of two-year-old Noah and four-year-old Lahela had never been an issue. The kids lived with Sally in Australia and their dad often visited from his home in Beirut. To Sally, everything seemed fine.
Twenty-four hours after that farewell, Ali told Sally. 'The kids aren't coming back.' It was every parent's nightmare ... and it was only going to get worse. Exhausting every avenue she could - pleading with Ali, using the courts, lobbying governments and contacting the media - she tried everything. Until her children were taken from her, Sally never thought she'd have the strength to fight so hard. But her love for Lahela and Noah left her with no choice. Waking in a Beirut prison cell handcuffed to a 60 Minutes television reporter, and being forced to relinquish custody in Lebanon to gain her freedom, Sally couldn't help asking herself... how did I get here?
About The Author: The arrest of Brisbane mum Sally Faulkner, journalist Tara Brown and a 60 Minutes news crew in Beirut was one of the most talked-about media stories in 2016. For the first-time ever, Sally Faulkner is telling the whole story - what led to her desperate attempt to bring her children home.