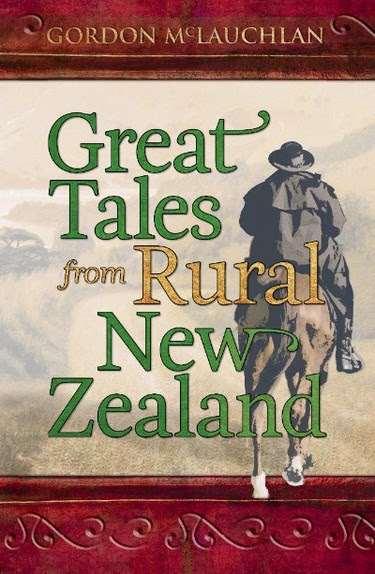 Amongst an impressive list of previous publications Gordon McLauchlan has already written a book of New Zealand historical stories, and another about the ports and shipping activities of the country’s past. Now he has collected an assortment of his pieces about rural life in New Zealand from the time when the Polynesians first arrived in canoes with their dogs and their rats and found a “Garden of Eden with no god, no humans, no apples for bait and certainly no serpents.” What they did find was luxurious forests, water and good, arable land which they, and those who followed them, began turning into farms. This book tells the stories about how it happened and those who made it so.

Most of the pieces are short – a couple of pages perhaps – and they are based on archives of various kinds, including McLauchlan’s own extensive private collection. They are comfortably down-home and occasionally blokeish in style – the sort of easy-going narratives that might once have been shared around a campfire. They are not “tales” in the fiction sense but rather stories about real people and events, from Polynesian mythology to the second world war, about prime ministers and swaggers, bush poets and cow-cockies, and cheese, wine and Chinese gooseberries.

It is probably true to say that it was not so long ago that New Zealand was regarded by the rest of the world as a quaint but sometimes endearing, slightly backward country. Among other faults, our poetry was sometimes unsophisticated, we suffered “a great national weakness: the she’ll-be-right syndrome, or good nature to the level of inertness” and we cooked our meat and vegies to death.

Well, that’s how it was – once upon a time. But Gordon McLauchlan also shows us how, as time went on, we learned a thing or two. We shrugged off the hick images, found new ways to show the world who we are and what we can do, and even had a few laughs along the way.