SOMETHING IS ROTTEN - first contemporary thriller from Echo Publishing 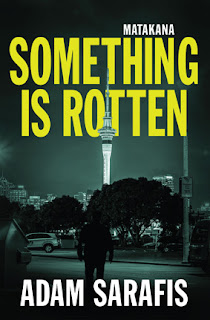 The first contemporary thriller from Echo Publishing,
Something is Rotten is a page-turning & suspenseful morality tale

When budding writer Brent Taylor dies a horrific death in the Auckland University Library, his friend, sex worker Jade Amaro, refuses to believe it is suicide. She seeks help from Sam Hallberg, a former government advisor on terrorism, now working as a mechanic.

As Sam reluctantly agrees to look into the death, a hunt for a lost manuscript leads him ever deeper into a complex case of corruption and deceit. Meanwhile, Sam’s friend, brilliant business journalist Lynette Church, embarks on an investigation of dirty political dealings with major global implications, and with ties to the Iraq War.  It soon becomes clear that something is indeed very rotten…

Beginning in New Zealand, then winding its way around the globe, this clear-sighted and tense thriller will have you on the edge of your seat. The first crime fiction release from Echo Publishing, Something is Rotten is a superbly written morality tale with Shakespearean twists and turns.

About the Authors
* Adam Sarafis is the creation of authors Linda Olsson and Thomas Sainsbury*. Auckland-born Adam Sarafis gained an undergraduate degree at Auckland University before completing post-graduate studies in Copenhagen. He worked as a reporter for various newspapers in Europe and Australasia, eventually becoming a freelance foreign correspondent for some the world’s largest agencies. This is his first novel.

Linda Olsson was born in Stockholm, Sweden in 1948. She left Sweden in 1986 and has lived in Kenya, Singapore, the UK and Japan, before settling in New Zealand. Her first novel, Let me sing you gentle songs (aka Astrid & Veronica) became an international bestseller, and has been followed by three more novels. She divides her time between Auckland and Stockholm.

Thomas Sainsbury was born in Matamata, New Zealand. After graduating from the University of Auckland he pursued a career in theatre, television and comedy. His darkly comic plays have been performed throughout New Zealand and in Australia, USA, UK, Greece and France. He co-wrote the award-winning New Zealand television comedy Super City and the Vietnamese