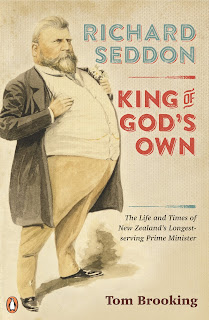 Please join us at a public history talk on Wednesday  2nd September to hear Professor Tom Brooking discuss his book:  Richard Seddon - King of God's Own
Published in 2014 this book is the first major biography on New Zealand’s longest serving Prime Minister in nearly 60 years. It has been well reviewed in New Zealand and recently shared the Ernest Scott Prize with Alan Atkinson's The Australians 3: Nation for the best book published in 2014 on Australian and New Zealand history, or the history of colonisation.

Although he was no saint Seddon was a far more complex and multi-faceted character than the often rather one-dimensional revisionist portraits within our historical literature. This tends to caricature him as an insensitive, anti-intellectual populist who also happened to be a demagogue, a racist, a cunning misogynist, a bully and a jingoist. Tom Brooking will attempt to explain how he tried to challenge this increasingly orthodox view by attempting to understand Seddon according to the values of his own times rather than condemning him from a comfortable, presentist distance.
In the attempt to reconsider Seddon, Brooking also discovered that he was far more than a mere pragmatist in that he adhered to a coherent set of ideals, achieved far more than had been formerly realised, that he laid the foundations of an order that would survive another three generations down to 1984, and that this interesting period in our history, that is, the 1890s and early 1900s, urgently requires further research and re assessment.

About the speaker:
Tom Brooking is Professor of History at the University of Otago where he holds a personal chair.  He is the author of seven monographs, three edited collections and two co-authored books as well as numerous articles, chapters in books and reviews.  He specialises in New Zealand rural and environmental history, political history and historical links between New Zealand and Scotland. He has written two other biographies - on Captain William Cargill, leader of Scots settlement of Otago, and John McKenzie, the leading land reformer in the Liberal Government in the 1890s and Seddon's major lieutenant. He is currently working on a book on the making of rural New Zealand and, possibly, an illustrated history of Seddon's New Zealand.