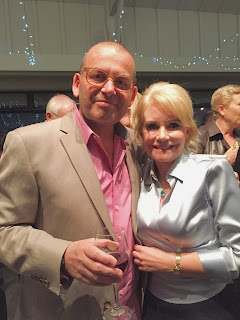 It is not every day that Paul Henry presides over a book launch, but it’s a ‘no brainer when the person whose book you are launching is your best friend. Paul paid warm tribute to Diane Foreman – exceptional entrepreneur, mentor, woman, friend – describing her as on the hardest working people he’d ever met, and noting her many successes in business and life. Celebrity photographer Norrie Montgomery captured the glittering crowd at the Tamaki Yacht Club; a gathering of Auckland’s foremost philanthropists, politicians and business people, that included the Honourable Judith Collins, the Honourable Paula Bennett, Dame Rosie Horton and Sir David Levene,  Paul had the honour of officially launching Diane Foreman In the Arena and raised a toast to Diane for yet another landmark achievement.
He then gave the floor to the night’s other speakers: Debra Millar, Jenni McManus and Diane herself.
Debra Millar, Penguin Random House Publishing Director, spoke of Foreman’s drive and determination in bringing her book to fruition with the help of prominent business journalist, Jenni McManus. Debra spoke with humility about what she described as the “minor role” she played in bringing Diane’s book to publication and expressed a debt of gratitude to Nicola Legat for having the foresight to commission a business book by Diane, when she headed up the Publishing division at Random House New Zealand.

That same spirit of generosity that imbued Debra’s words were reflected in Diane’s speech, during which she expressed her heartfelt gratitude to all who had gathered to celebrate with her, in particular, Paul Henry, Jenni McManus, Executive PA Debbie Gould and the publishing team at Penguin Random House. Diane’s final words of appreciation were to her family and friends, and partner Jason, for being her last line of defence and support network, enabling her to pursue “every crazy scheme” she gets involved with. Diane gave everyone who attended a copy of her book, encouraging them to read it and make a difference in their working lives.

For more about Diane Foreman’s story, have a listen to her interview with Kathryn Ryan on Nine to Noon: http://www.radionz.co.nz/audio/player/201768386.