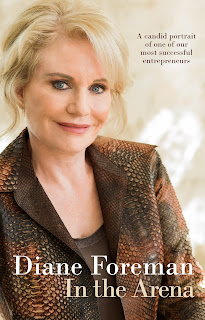 “We all want to know how she did it. How did she succeed? How did she fail? This is authentic advice from one of the world’s most authentic business leaders, invaluable to all entrepreneurs . . . Diane has left the ladder down for all of us to climb up a bit quicker.” – Beth Brooke-Marciniak, Global Vice Chair of Public Policy, EY
Entrepreneurship is in Diane Foreman’s DNA. In childhood she was selling eggs laid by her own hens and as a teenager she was operating a babysitting franchise. But Diane Foreman’s road to global success was beset with challenges and lessons hard won. Leaving school at 15 with no formal qualifications and a solo mother by the time she was 20 – albeit holding down two jobs at the same time – Diane Foreman turned things around to become one of the world’s most successful entrepreneurs; named by Forbes magazine in 2014 as one of the most powerful women in Asia.
Diane Foreman: In the Arena is a revealing account of one of New Zealand’s most high-profile entrepreneurs and business leaders. It is also a practical and insightful guide into what it takes to succeed in business. Schooled in the ‘board room of hard knocks’, where she often butted heads with her male contemporaries, Diane Foreman’s informal apprenticeship to Trigon CEO Bill Foreman – her partner and mentor for many years, and to whom she pays tribute – was formative. From him, she learned the importance of investing in people, and knowing and exceeding your customers’ expectations.
Diane Foreman forged her own entrepreneurial style while using her intuitive business sense in her dealings with customers, staff and peers. This contributed to her success, as did appraising businesses and people; establishing professional relationships founded on trust; seeking out mentors; incentivising staff; focusing on planning, research and development; keeping an eye on the numbers every day; and never hiring anyone who walks slowly.
Diane Foreman’s passion for people and the desire to grow successful businesses has seen her involved in a variety of sectors, including healthcare, property, recruitment, food manufacturing and charitable organisations. In each, her signature drive, tenacity and determination have come to the fore. With husband Bill she oversaw the sale of plastics giant Trigon in 1994 and went on to form her own multi-million dollar export company the Emerald Group. Throughout, Diane Foreman’s mantra has always been ‘hire slowly, fire fast’, which has doubtless contributed to her success.
More about the author - Diane Foreman CNZM is one of New Zealand’s most successful businesswomen. Through the Emerald Group, Diane Foreman invested in New Zealand healthcare; American and New Zealand manufacturing; premium recruitment firm Emergent; and boutique hotel The Emerald Inn on Auckland’s North Shore. She is a former deputy chair of the Business Roundtable and has worked with a number of charities. Since becoming New Zealand EY Entrepreneur of the Year, Diane Foreman has been involved in these prestigious Awards as a Judge, Mentor and Key-note speaker.
Posted by Beattie's Book Blog at 8:29 am