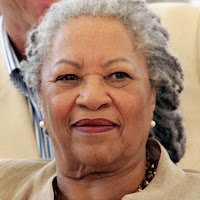 Nobel Prize-winning novelist Toni Morrison will participate in a first-of-its-kind digital book signing and a Google+ Hangout on Air at the Google New York offices. Using a Wacom tablet, Morrison will sign digital versions of her newest national bestseller, Home, published by the Knopf Doubleday Group, and will be signing the Vintage Books paperback edition of Home for Google employees. The live Hangout celebrates the paperback release of Home, as well as the culmination of Black History Month events sponsored by the Black Googler Network. The event starts at 3 p.m. EST on February 27, 2013.

During the Hangout Morrison will chat with book clubs around the country. This is the first nation-wide event that Morrison has done with book clubs. The Hangout will be livestreamed on Google+ and YouTube and promoted on Google Play. Fans can watch the Hangout in real time and submit questions electronically.
Posted by Beattie's Book Blog at 6:26 am