On Wednesday this week evening an enthusiastic crowd packed the splendid Arcadia Bookshop in Newmarket for the launch of C.K.Stead's latest collection of verse, The Yellow Buoy.

Among  the audience I noticed many from the world of books including:

About the poet:
CHRISTIAN KARLSON STEAD was born in Auckland, New Zealand, in 1932. Acclaimed both at home and internationally, he has published more than forty volumes of fiction, poetry, memoir and criticism.
In this, his fifteenth collection of poetry, the writer journeys in time and space from Croatia and Colombia to Karekare and the Cote d’Azur; Catullus returns to receive plaudits, write to friends and read the world; and various other literary fellows appear in person, dream or conversation – Allen Curnow and Hugh Kawharu, Frank Sargeson and Barry Humphries, Robert Creeley and Katherine Mansfield. Alongside glimpses of fantails and elegies for friends, The Yellow Buoy also includes translated versions of poems by Eugenio Montale, Carlo Vita and Philippe Jaccottet. These poems wisely urge a reader to stay alert, to pay attention, to ‘the poetic moment I so easily missed, I so quickly lost.’

Stead’s numerous prizes and honours include most recently the 2009 Prime Minister’s Award for Fiction, a 2009 Montana New Zealand Book Award for his Collected Poems, the Sunday Times EFG Private Bank Short Story Award and the Hippocrates Prize for Poetry and Medicine in 2010. Stead received our country’s highest award, the Order of New Zealand, in 2007.

Here are three of my favourite poems from the collection:

Vivienne
Today was her send-off.
In a plywood coffin
hand-painted with flowers
she was laid out on trestles
in the Trades Hall,
eighty-four years
of Stalinist conviction
leavened by jokes.

Tunelessly
interspersed with reminiscence
we sang The Internationale
The Red Flag
and for last farewell
that Bill Blake soul-stirrer
Jerusalem.

For her the Wall had fallen
and nothing was changed.
Love and folly persist
and our songs are their servants.

The working port is a sheet of noisy light
across the harbour. Greg thinks he hears men’s voices
shouted above their fork-lifts, drifting
over the autumn water. Floodlit on the hill
the Museum stands to attention. Eastward
light and shadow scout’s-pace the waterfront drive.

Kay and I and Chris, Greg and Jenny –
today we watched good editor Dudding let down,
fruit and flowers on his plain-wood coffin,
while we sang to trees and sky those arcane ballads
he liked to croon – ‘Clementine’, ‘Yellow Bird’,
‘Cockles and Mussels’ – a life remembered, rich
in songs and daughters, books and chooks and friends,
fruit, vegies, flowers, never quite in tune.

Some shadowy tug or fishing boat chugs by
discreetly, puttering over the silky water.
Summer is always ending. Five good friends
on one veranda now, we’re looking across
to the brilliant city as if that were our past
and we at the rail, sailing out, waving goodbye.

Frank
Rain in the night and I’m dreaming of Frank
all those years ago alone in his fibro bach
waiting for Harry, thinking what this dousing will do
for his lettuce and beans, silverbeet and peppers,
but especially the rock-melons – always
the melons are mentioned because they’re exotic
(and how good he got the tomatoes picked in time!) –
such a generous sound, rain on an iron roof
in a haven of books and papers, while a story
about Harry goes round in his head . . . so much
rain, so long ago, such a garden, such a friend. 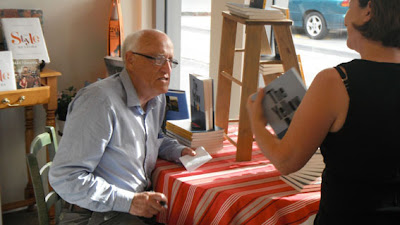 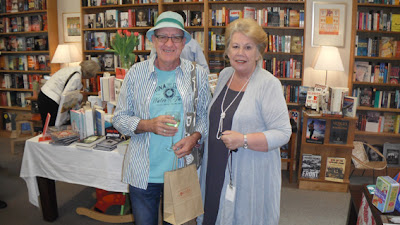 Footnote:
Professor Emeritus Mac Jackson's remarks in launching the book will be posted on this blog later.
Posted by Beattie's Book Blog at 6:25 am