How crime fiction has moved on 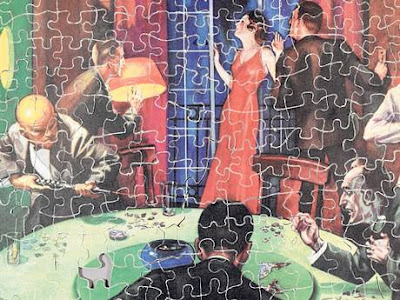 Thrilled to pieces: 'The Jigsaw Puzzle Murder' by Walter Eberhardt

At the entrance to the Murder in the Library, a compact new exhibition that charts the A-Z of crime fiction at the British Library, there's a panel that lists Monsignor Ronald Knox's 10 rules of detective fiction, which are as follows:

1) The criminal must be someone mentioned in the early part of the story, but must not be anyone whose thoughts the reader has been allowed to follow;
2) All supernatural or preternatural agencies are ruled out as a matter of course;
3) Not more than one secret room or passage is allowed;
4) No hitherto undiscovered poisons may be used, nor any appliance which will need a long scientific explanation at the end;
5) No Chinaman must figure in the story;
6) No accident must ever help the detective, nor must he ever have an unaccountable intuition which proves to be right;
7) The detective must not himself commit the crime;
8) The detective must not light on any clues which are not instantly produced for the inspection of the reader;
9) The stupid friend of the detective, the Watson, must not conceal any thoughts which pass through his mind; his intelligence must be slightly, but very slightly, below that of the average reader;
10) Twin brothers, and doubles generally, must not appear unless we have been duly prepared for them.

Knox came up with these commandments as a preface to Best Detective Stories of 1928-29 (hence the murderously un-PC "Chinaman" comment), so he was writing about the Golden Age of detective stories. This era is represented in Murder in the Library by examples of the work of Agatha Christie, of course, Dorothy L Sayers and Ngaio Marsh, as well as exhibits of less well-known whodunits that variously reveal the identity of the killer via a jigsaw (The Jigsaw Puzzle Murder by Walter Eberhardt, 1933), or let readers work out the culprit by studying real clues (cigarette ends and hair clippings in the case of Murder Off Miami, by Dennis Wheatley and JG Links, 1936) that come neatly packaged for that purpose. Whodunit was both the genre, and what every reader wanted to try and work out. It was about reading, but also about solving a puzzle.

Full story at The Independent
Posted by Beattie's Book Blog at 6:18 am