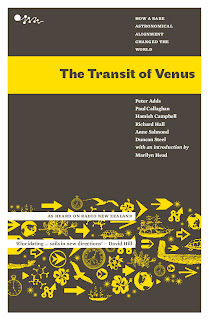 THE TRANSIT OF VENUS AWA PRESS NZ$25
The small but perfectly formed Awa Press continue to enhance their name as a leading New Zealand publisher of contemporary non-fiction.
This new title, sub-titled How a Rare Astronomical Alignment Changed the World, collects together the lectures of the Royal Society Transit of Venus series originally broadcast on Radio New Zealand.
It is clearly an entertaining and informative must for all those astronomy buffs out there, like my brother-in-law Steve, who are impatient for the next Transit of Venus on 6 June 2012.
By the way I checked with Google and found that the 6th June 2012 is a Wednesday!
Forthcoming science titles to look out for from Awa Press include North Pole, South Pole and The Awa Book of New Zealand Science.
Posted by Beattie's Book Blog at 1:44 pm