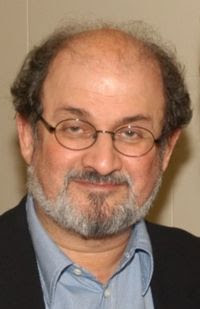 The Guardian reports on the literary world's delight at knighthood.
Author pic from Wikipedia website
On the other hand Pakistan demand withdrawal of knighthood. This report from the Globe and Mail.
Posted by Beattie's Book Blog at 10:53 pm

But I'm sure Sir Rushdie has mixed emotions on this; the Queen has put him in much greater danger. Maybe he'll wish he had turned it down.

At least this incident will lose the terrorists at least a few more of their dhimmidiot appeasers.

Islam in it's extreme is more political ideology than religion. In that way, it is only a 'Religion of Peace' in that when Islam rules the planet, there will be no one to be at war with. Where they are given an inch, they demand a mile. Islamic countries are becoming more extreme, extremists rule, they just keep quoting the Koran to justify their Jihad.

continue to spoil them
violent tantrums pay off
.