Nobel prizewinner Alice Munro: 'It's a wonderful thing for the short story'

This week Alice Munro will receive the Nobel prize for literature. Lisa Allardice, who met Munro in Canada after the publication of her collection The View from Castle Rock, asks her about the dividing line between life and work 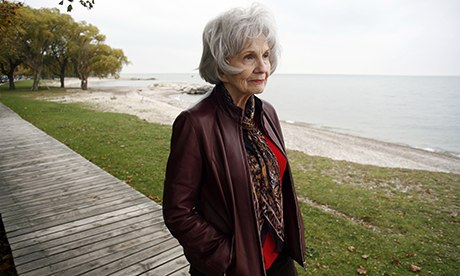 Alice Munro stands on the bank of Lake Huron in Southern Ontario, the setting for many of her stories. Photograph: George Waldman/Polaris/Eyevine

To say that Alice Munro inspires devotion among her readers is more than cliche: for Jonathan Franzen she is "the Great One", for Margaret Atwood "an international literary saint", for the New Yorker magazine, where her stories have appeared since the 1970s, she is "our blessing". After years of consternation as to "why her excellence so dismayingly exceeds her fame", as Franzen put it in an impassioned piece in the New York Times in 2004, this week her followers can finally be satisfied: Munro is Nobel Laureate for Literature. Her daughter Jenny will travel to Sweden to attend the ceremony on her behalf because Munro, now 82, is not well enough to make the journey herself. She is the 13th woman and the second Canadian (if you count Saul Bellow, who emigrated when he was nine) to have been awarded the prize. "We had to wait more than a century, but we finally have a Nobel for a pure short-story writer," says Franzen.

"I don't think I can write any more. Two or three years from now, I will be too old, I will be too tired," Munro said when I interviewed her after the publication of The View from Castle Rock in 2006. "How much of my life have I spent going along this road, what else could I have been doing, and how much energy have I been taking from other things? It is very weird to think this now, because my children are older they don't need me around, and yet I feel somehow that I've only lived one part of this life and there's another part that I haven't lived."

She may not have kept her resolution not to write again, but she has for the most part, even in the post-Nobel commotion, kept her promise not to do any more publicity. In July this year she formally announced her retirement (although a brief broadcast on Canadian television after the Nobel announcement teasingly hinted she might be tempted to write again). Her health is clearly an issue. When her long-term Canadian editor, Douglas Gibson, received her 2012 collection, Dear Life, he says she told him this would be her last book and he felt that she meant it this time. It includes a coda to the four final stories: "I believe they are the first and last – and the closest – things I have to say about my own life."
More
Posted by Beattie's Book Blog at 6:12 am