Alphabetical; How Every Letter tells a Story - Michael Rosen - Reviewed by Gordon McLauchlan 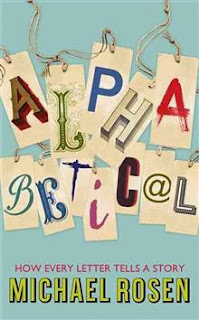 It is difficult to understand that some educated people aren’t interested in language, its origins and its use in daily life. It is, after all, fundamental to our evolution as human beings. Without it we would still be up in the trees harrumphing at each other, and fingering through the fur for each other’s fleas.
I don’t mean, by interest in language, those curmudgeons of any age who suffer apoplexy at the misuse of apostrophes (which is a bit like fingering through other’s fur for fleas); at the horror of using “like” instead of “such as”; at the failure to use the subjunctive; or the prolific  use of slang.  I rather mean the wonder at how language brought us down from the trees in the first place and raised us from being slaves to the incomprehensible forces of nature, and how it enabled humans to think subtle thoughts.
The greatest cultural lift after speech came from writing, which Swedish linguist, Tore Janson, called “the most important of all the inventions of mankind” in his excellent but rather Eurocentric language history called Speak.
With voice commands developing for internet functions, and oral responses, the end of writing may be nigh, or its effectiveness in day to day communication at least diminished. But I hope not.
In the meantime, we have Michael Rosen’s very satisfying background to our present written language: Alphabetical, subtitled “How Every Letter Tells a Story”, which cleverly tells us whence came the letters of the alphabet that construct our modern English words. Many have travelled tortuous paths from ancient attempts at writing.
In summary, the first written languages used logographic symbols for words. Some still do. The alphabet system of signs representing the individual sounds that make up words comes to us most directly from ancient Greek. The word itself is derived from the first two letters of their alphabet, alpha and beta.
Early written languages – such as Aramaic, the language Jesus spoke -- used an alphabet of consonants in which pronunciation depended on context. The early Greeks adopted such an alphabet from the Phoenicians – and, about 3000 years ago, added the vowels.
That’s not all we owe the Greeks. They gave us many of the words they composed to deal with philosophical and scientific concepts.
This book is a work of scholarship, expanded by a writer who is bursting with tales to tell, and Rosen is an accomplished story-teller. Around the origins and development of each letter he spins warm and fascinating yarns about the language in general.
In The Story of A,  he refers to “the ‘Great Vowel Shift” between 1400 and 1600 when “ahs” changed to “ays”,  adding that anyone who doesn’t believe this “should talk to New Zealanders who are, even as I write, in the throes of turning their ‘pins’ into ‘pens’ and their ‘pens’ to ‘pins’.”
Just in case anyone missed that, in the story of C, he writes: “As with all English vowels, ‘e’ is given many jobs to do, very few of which are 100 per cent consistent. We can be sure that in consonant-vowel-consonant formations like ‘peg’ and ‘bet’, it will be pronounced with a ‘short e’ – apart from in New Zealand”.
That may be of special interest to us but my favourite anecdote comes with The Story of C. During the Second World War, the Daily Telegraph invited contact from anyone who could do their cryptic crossword in less than twelve minutes. Twenty-five readers who responded were invited into the office to sit a new crossword test. Five of them completed the task within the twelve minutes and one person had only one word to go when time was up. The six were then recruited as code-breakers at Bletchley Park.
There is a long, intriguing and amusing section under “O” about the origins of OK    . His conclusion is it could have come from any of many possible sources – from “och aye”, from “orl korrect”, and others.


Most books in English on the history of language tend to be Eurocentric, and Rosen’s is inevitably so because he is writing of the Latin alphabetic which is the basis of most European languages; but Chinese is the language which has lasted longest in history (with Egyptian second). For readers who want to embrace a complete world language history the best I’ve read is Empires of the Word; A Language History of the World by Nicholas Ostler. It is one of those books that make one wonder how any author could possibly know so much in one lifetime.

About the reviewer:
Gordon McLauchlan is an Auckland-based writer and commentator and regular reviewer on this blog.
Posted by Beattie's Book Blog at 8:21 am